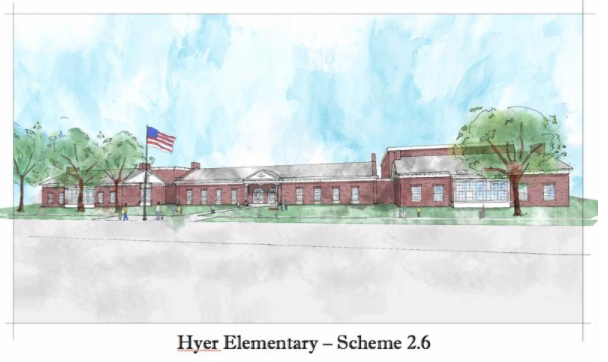 The Highland Park ISD board of trustees met Monday for a workshop to discuss the reconstruction of Hyer Elementary, as HPISD continues to carry out plans to rebuild or remodel all elementary schools within the district.

Here’s a quick rundown of the meeting’s highlights:

1. Stantec presented two possible floor plans to the board – a two-story plan, and a three-story plan

One of the points of disagreement surrounding Hyer’s reconstruction is whether the school will become a tw0- or three-story building. Stantec, the architectural design firm responsible for all elementary school remodels in HPISD, presented two such possible floor plans to the board – a two-story and a three-story plan. Superintendent Tom Trigg reminded board members that these two plans were not the only floor plans to choose from, but were being presented as a “starting point” for more discussion.

The Design and Construction committee has recommended that the district’s architects proceed with design of a two-story school, known as version 2.6. It comes with one-story entry on Caruth, similar to the current school, and three two-story classroom wings facing Colgate. As designed so far, version 2.6 would slightly decrease the setback on the school property toward both Caruth and Colgate. It would provide approximately 105,000 square feet of active play space, compared to approximately 79,000 square feet now and would retain 36 of the 47 trees on site.

“This has been a long but extremely important and necessary process,” said HPISD Board President Jim Hitzelberger. “Because we are making a 100-year decision, we owed it to our community to thoughtfully consider all options along with diverse community input and opinions and the ramifications of each. In the end, we all want the same thing-a beautiful building and campus that serves the needs of both our students and the community for decades to come. This was certainly a team effort.”

3. Green space continues to be a talking point

Hyer’s current layout is loaded with green space, and many residents have expressed a desire to keep it that way. The two layouts presented by Aldis retained ample green space: the three-story plan, for instance, includes approximately 117,000 square feet of green space. Both layouts also include a large soccer field, an athletic court, a science garden, and the possibility for a kindergarten-specific playground.

Property lines for schools usually begin immediately off of the street it sits on, but Hyer’s line could begin 20 feet back from Caruth, which is on the south side of the school. It’s a slight cut into the school’s potential green space, but a cut nonetheless. Also, it’s possible that Colgate, which is on the north side of the school, could be used as a drop-off and pick-up lane while the student population at Hyer is higher thanks to the reconstruction of other HPISD schools. Once those students return to their usual schools, Colgate would once again be used as a safe space for children to walk and ride their bikes, according to Trigg.

5. Next meeting to discuss Hyer still up in the air

A meeting was originally called for June 21 for the board to possibly act on a three- or two-story plan, but that meeting was cancelled the evening of June 20. It’s yet to be determined when the board will meet again, with summer in full swing.

For updates, stay tuned to parkcitiespeople.com.