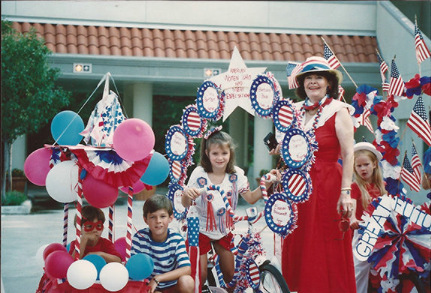 Mary Katherine Maddox didn’t set out to become a July Fourth organizer in 1970.

She just wanted to know on which day of a three-day weekend the Park Cities Jaycees’ parade would roll, and no one at University Park City Hall seemed to have the answer.

“Finally, the operator put me through to the chief of police, and he explained that nobody had taken out a permit,” she recalled.

The Jaycees had shifted focus to a University Park Founders’ Day event in the fall, but Maddox felt the parade should continue. It was longer than the one-block parades held elsewhere in the Park Cities and was an important tradition at an important time for the nation.

“That was a time flag burning was coming into our culture,” she recalled.

With only about 10 days to organize, Maddox and her husband, Bill, and a few friends stepped in to keep the parade and picnic going.

“I always thought that Dr. Maddox and I and this other family just put our finger in the dyke until somebody else could take it,” she said.

The Jaycees usually spent all year preparing, but a member advised Maddox there were only a few essentials, including letting the Salvation Army know to bring lemonade, contacting the fire departments to get fire engines, and applying for permits.

By 1971, a civic committee formed. Couples would take turns leading the parade until Kirk Dooley recruited the Exchange Club to take it on in 1999.

The committee would meet a few times a year with members taking on different roles, Madddox said. For example, one woman wanted sack races. Speakers and musicians were scheduled for the picnic in Goar Park. A jury system was created for judging decorated bicycles and floats.

Diane Galloway and Kathy Matthews in The Park Cities: A Walkers Guide and Brief History, describe how people embraced the parade. “The residents of many blocks get together the night before to decorate a float for the parade – the redder, whiter, and bluer the better.”

The result: Goar Park’s gazebo, large enough to hold an orchestra, was dedicated on July 4, 1980, according to the book by Galloway and Matthews.

Many couples, including Dooley and his wife, Charlotte, found chairing the parade challenging but fun.

“I learned to not let the eight jerks ruin my day when 8,000 other people were having a great time,” he said, recalling an encounter with an overanxious antique car driver.

An officer pulled the car over and made the driver wait.

“And when the parade was over, (the officer) let him go,” Dooley recalled. “I thought, ‘I wish I could be a police officer and do things like that.’”