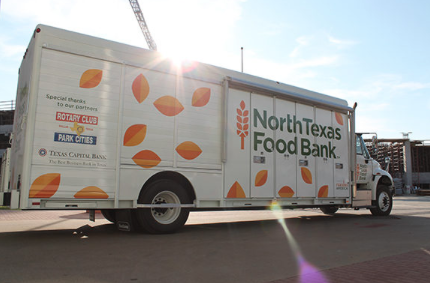 While the annual Fourth of July celebration in the Park Cities will be a red, white, and blue affair — full of food, face paint, and other festivities — the event, hosted by the Rotary Club of Park Cities, carries an objective far beyond a show of patriotism: helping to alleviate hunger in North Texas.

For the second year, the North Texas Food Bank will be the primary beneficiary of the annual parade, which travels two miles from Highland Park Town Hall to Goar Park.

“Fighting hunger and addressing the needs of the hungry locally is one of [the club’] priorities,” Phillip Bankhead, parade chair and club past president, said. “It seemed like the perfect group to partner with.”

With no entrance fee and free entertainment, the club raises money through voluntary donations from commercial entries and the goodwill of attendees, as well as large donations from U.S. Trust and the Hal and Diane Brierley Foundation.

“What began as a canned food drive has grown into a strategic partnership,” Rotarian John Gilchrist said. “The parade is a celebration of America and the values we hold near and dear, but we also want to increase awareness, as well as raise money for the North Texas Food Bank.”

Three years ago, the Rotary Club of Park Cities took on the challenge of raising enough money to open a new mobile food pantry, which would help take fresh fruits, vegetables, and other staples to designated food deserts — places that are both economically distressed and lacking access to fresh groceries.

“These are communities where, many times, their best option to get food is the corner gas station,” Diana Kao, major gifts officer at the North Texas Food Bank, said.

“The mobile food pantry helps deliver fresh produce to these places and raises awareness that North Texas is still very much in a fight against hunger.”

A 2015 study conducted by Feeding America found that there’s a “meal gap,” an annual food budget shortfall, of 92 million meals in North Texas.

To contribute to the North Texas Food Bank, visit RCPCJulyFourth.causevox.com.

Another Doak Looks to Make Mark with Scots