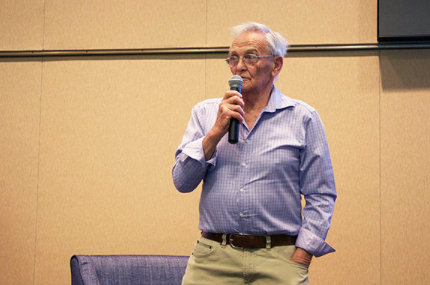 As a young boy growing up in Germany during World War II, Karl Kuby Sr. saw American soldiers for the first time after his first few days returning home from a military school.

Kuby admired the Americans because they were easygoing, friendly, and always laughing. They threw candy to some of the German children when they arrived.

Now at 85 years old, Kuby looks forward to throwing candy while serving as grand marshal during the Park Cities Fourth of July Parade.

“It’s a great honor,” Kuby said. “I love my customers. They are the ones that recommended me to be grand marshal.”

Rotary Club of the Park Cities parade chairman Phillip Bankhead said Kuby was nominated by a selection committee and multiple past grand marshals.

Bankhead said the club looks for grand marshal candidates from those in the Park Cities who have made a meaningful contribution, who mimic the Rotary ideals of honesty, fairness, and good will to all, and who are well-known and respected in the community.

After nearly 60 years in the Dallas area, Kuby has become well-known to his customers. Kuby was 23 when he received sponsorship from one of his relatives living in the United States and traveled by boat to the U.S. in 1956.

“When I hear the national anthem, sometimes I have tears [in] my eye,” Kuby said.

After a couple of years, another man approached Kuby with a deal for a spot at Kuby’s current location on Snider Plaza. Kuby made every payment on time and eventually the landlord sold him the space.

Nearly 60 years after Kuby’s current location opened, he isn’t in the shop as much.

His son, Karl Kuby Jr., now runs the shop, but Kuby Sr. still drops by a few times a week to pass out gummy bears to children.

Kuby Sr.’s patriotism toward the U.S. has only grown since moving here.

Not long after moving to the U.S., Kuby tested for and earned his citizenship. In his front yard, he has an American flag he got from former President Ronald Reagan. The flag once flew over the White House.

“When I hear the national anthem, sometimes I have tears [in] my eye,” Kuby said.

Kuby will help kickoff the parade on July 4 donning his “Let Freedom Ring” shirt near the Highland Park Town Hall.

One thought on “This Year’s Grand Marshal: Karl Kuby Sr.”