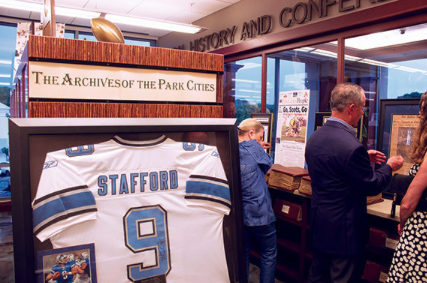 New cabinets at the University Park Library house the Archives of the Park Cities, a collection that includes memorabilia from the five Scots football state championships.

“For years our society has been looking for a place to house these archives,” said Taylor Armstrong, Park Cities Historic and Preservation Society advisory board member. “Our goal was to create a repository for all that history.”

The society on June 7 dedicated the archives in a celebration that included Scots head coach Randy Allen.

Allen spoke about the achievements of the football team, and players from the 2017 championship team shared accounts of the day that team won state.

Afterwards, players ranging from 2017 all the way back to 1945 gathered for group photos and took a moment to view championship memorabilia.

The football memorabilia display is a one of several planned rotating exhibits to be featured alongside the archive’s Brown Books and Highland Park High School yearbooks, which will be available for the public year round.

The Brown Books are a collection of all homes in the University Park and contain a photo of each home at the time of its construction, the date it was built, its tax rolls and the original cost.

“This is just the beginning,” Armstrong said “We want this to be a living thing. We want to continue to add to it.” 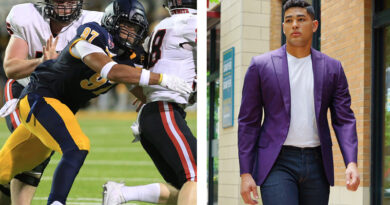