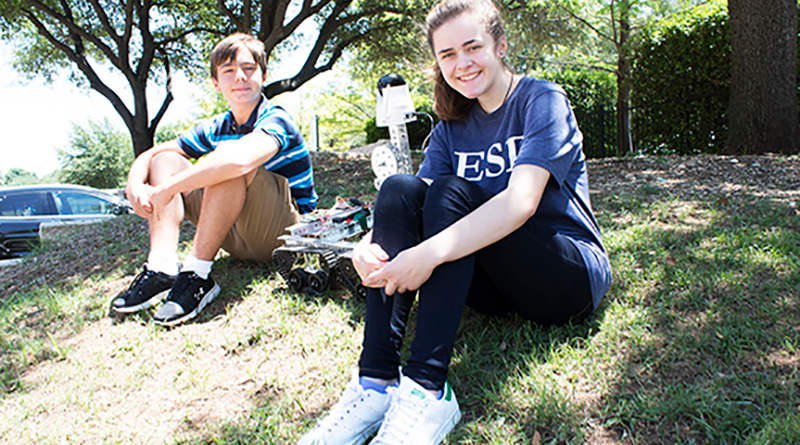 Working from a list of requirements and two months of training modules, three freshmen from the Episcopal School of Dallas designed and built a search and rescue robot for use by campus security.

The assignment originated with a conversation between engineering and robotics teacher Bart Burnett and Officer Jody Trumble, director of campus safety.

Burnett had experience with working on robots and asked whether Trumble thought one would be useful for the school.

With a desired feature list provided by Trumble, students Carter Bakewell, 15, Tripp Benner, 16, and Stella Foreman, 15, started the project by individually designing how they wanted the robot to look and function.

They experimented with different chassis design, mobility options, and camera setups, but each design fell short in some way.

“Eventually they hit the point of ‘OK, this is just not working,’” Burnett said. “That’s when it clicked in and came together. That’s when they became an amazing team.”

The team worked to reach a final design that features a raised rectangular chassis, four tank treads and a night vision camera. The robot is capable of being remotely operated from up to 100 feet away, maneuvering around and on obstacles, and wirelessly broadcasting its video feed.

Taking what they learned from this past year, the team is planning to make improvements to their design over the next three years.

“I would like to recreate the robot using stronger materials and create a one-piece model of the robot to further increase its durability and longevity,” Benner said.

In a demo for Trumble the robot navigated over a 40-degree hill in wet and muddy conditions.

Trumble is now working to integrate the robot into campus security and intends for the robot to eventually handle potential bomb threats.

“It was great to watch their successes,” Trumble said. “I got to give them credit, they blew my expectations out of the water. I’m very proud of them.”

See the security robot in action in this video.