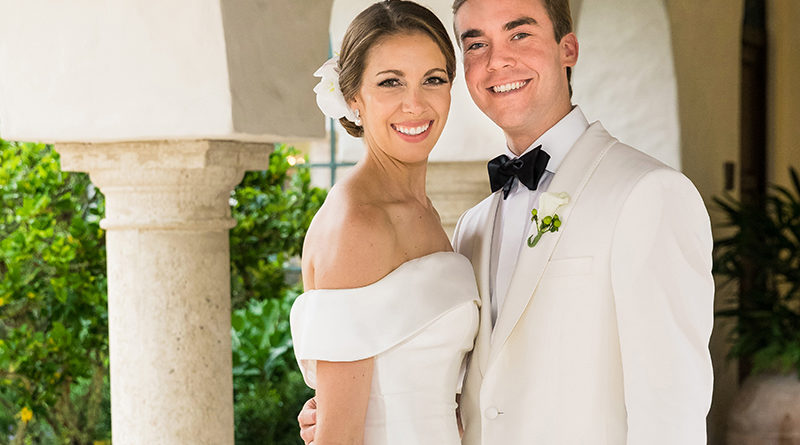 Claire Parkhill Maclay and Daniel Paul Auffenberg Jr. were married on the evening of June 9, 2018 at Saint Simons Presbyterian Church in Saint Simons, Georgia. Reverend Pete Deison and Reverend Alan Dyer officiated the ceremony. A reception immediately followed the ceremony at Ocean Forest Golf Club in Sea Island, Georgia. A rehearsal dinner, hosted by the groom’s parents, was held the evening before at the Beach Club in Sea Island.

The bride was given in marriage by her parents and escorted down the aisle by her father. For her wedding, she chose a Mikado silk off-the -shoulder fitted gown featuring a three-tiered trumpet skirt with covered buttons leading up to an elegant deep V back. She wore the groom’s sister’s cathedral-length veil, which extended beyond the chapel-length train of her gown. Her bridal bouquet of white callas, peonies and roses was wrapped in her aunt’s vintage lace handkerchief and fastened with the groom’s maternal grandmother’s brooch.

The bride is a graduate of Highland Park High School and received her Bachelor of Business Administration in Accounting from Baylor University where she was a member of Kappa Kappa Gamma sorority. She also received her Masters in the Science of Accounting from Southern Methodist University. The bride is currently employed by Veritex Bank of Dallas. The groom is a graduate of Cascia Hall Preparatory School in Tulsa, Oklahoma and received his Bachelor of Business Arts in Marketing and Entrepreneurial Management from Texas Christian University where he was a member of Sigma Alpha Epsilon fraternity. He also graduated from the International Culinary Center in New York City. The groom is currently employed by DuWest Realty.

Following their honeymoon trip to Vietnam, Cambodia and Thailand, the couple have made their home in Dallas.