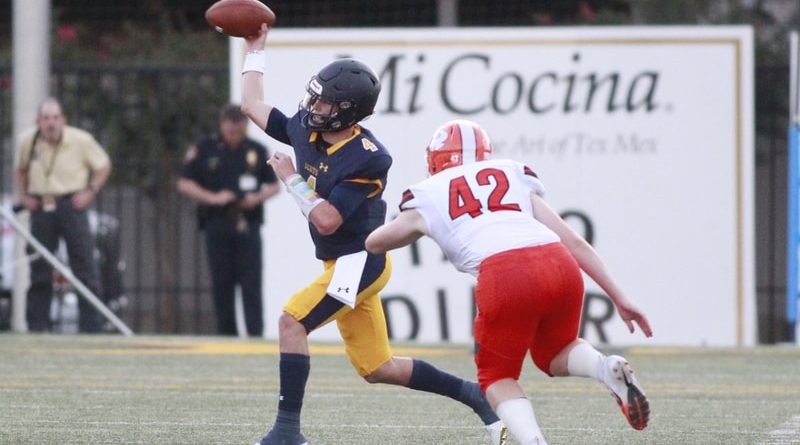 A fourth-quarter power outage did nothing to zap the energy from Highland Park during Friday’s season opener. The Scots started strong and finished stronger to secure a 49-42 seesaw victory over Rockwall at Highlander Stadium.

Chandler Morris was impressive in his first varsity start for HP, rushing for four touchdowns — including a 70-yard scamper in the first minute of the game — and throwing for two more scores, both to Drew Scott.

Hudson Clark intercepted two passes to lead the HP defense, and the Scots held off a furious mid-game rally by the Yellowjackets to avenge a loss to Rockwall from a year ago.

“Our guys were mentally tough,” said HP head coach Randy Allen. “They had all the momentum, and we came back and scored and played better. There were a lot of things they had to overcome, but they kept hanging in there.”

Morris showed genuine dual-threat ability with a game-high 105 rushing yards on 10 carries. He also completed 22 of 30 passes for 338 yards, spreading the ball around to nine different receivers.

“He had a tremendous game,” Allen said. “He ran the ball extremely well and threw the ball very accurately. He scrambled and hit receivers.”

The resilient Scots surrendered a 21-point lead before battling back late in the third quarter. Morris connected with Scott on a 16-yard scoring strike to tie the score at 35.

Rockwall’s gamble failed on its next possession after an incomplete pass on fourth-and-1 from its own 39. The Scots took advantage of the short field, converting a pair of third downs on the ensuing drive.

Morris scored on a 9-yard run in the final minute of the third quarter to give the Scots a lead they never relinquished.

A power outage midway through the fourth quarter delayed the game for 16 minutes, but didn’t stop HP’s momentum. The Scots came up with another big defensive play when Colby Hopkins recovered a fumble near midfield.

Morris again engineered a scoring drive that culminated in a 4-yard scoring plunge to extend the advantage to 49-35 with only 3:38 remaining.

The Yellowjackets marched down the field thanks in large part to a 50-yard completion from Jacob Clark to Jaxon Smith. But the duo couldn’t connect on fourth down from the HP 7.

From there, Rockwall simply ran out of time. A 42-yard punt return by Smith set up a short Zach Henry touchdown run in the closing seconds, but the Scots recovered an onside kick to preserve the victory.

“We made a bunch of fourth-down stops,” Allen said. “We put pressure on the quarterback and just played hard.”

Smith was terrific in a losing effort, finishing with 13 catches for 232 yards and two touchdowns. Jacob Clark was 22-of-34 passing for 295 yards, and also ran for a score.

The first touchdown for Morris came on the fourth play from scrimmage, when he outran the Rockwall secondary down the sideline on third-and-9.

After three stops by the HP defense — one of which came on a diving interception by Clark at the HP 17-yard line — the Scots scored again. Morris found Drew Dodge for 34 yards as part of a drive capped by a 23-yard catch by Scott.

Clark picked off a tipped pass three plays into the next Rockwall possession, and returned it 40 yards to the end zone, giving the Scots a 21-0 cushion.

“Some of the critical moments in the game, they executed better than we did,” said Rockwall head coach Rodney Webb. “We had some real colossal failures in pass protection. We have a relatively inexperienced offensive line, and they got schooled. Their linebackers did a great job blitzing.”

HP led 28-7 late in the first half when the Yellowjackets turned the tide. In the final minute before halftime, Rockwall successfully executed a trick play, with receiver Logan Claborn throwing to Henry for 35 yards to the HP 1. Clark crossed the goal line on the next play.

The Jackets kept the momentum into the third quarter, starting on the HP 41 after a botched onside kick by the Scots.  Three plays later, Jacob Clark floated a long touchdown pass to Smith, and it was 28-21.

Then Rockwall recovered an onside kick, drove the field again, and tied the game on a 3-yard run by Smith from the Wildcat formation. The touchdown came after a critical unsportsmanlike conduct penalty on the HP bench that turned a third-and-goal from the 5 into a first-and-goal at the 3.

The Scots drove to the Rockwall 7 on the next possession before Anfernee Orji intercepted a Morris pass and returned it 91 yards for a touchdown, giving the Jackets a 35-28 lead. Rockwall scored 28 straight points in less than five minutes spanning the second and third quarters.

HP re-established control in part because of some key runs by Benner Page, who finished with 80 yards on 17 attempts. The Scots racked up 525 total yards as a team.

Allen also praised the aggressive HP defense, in its first game under new coordinator Cale Melton, which posted five sacks and forced three turnovers. The Scots also made some big plays down the stretch to prevent Rockwall from repeating last year’s late comeback.

“Our guys have been in this situation before,” said Allen, whose team will host Mesquite Horn next week. “When they have a will to win like they do, they’re just not going to give in to adversity.”

Scots Look to Finish Perfect Run in 15-5A