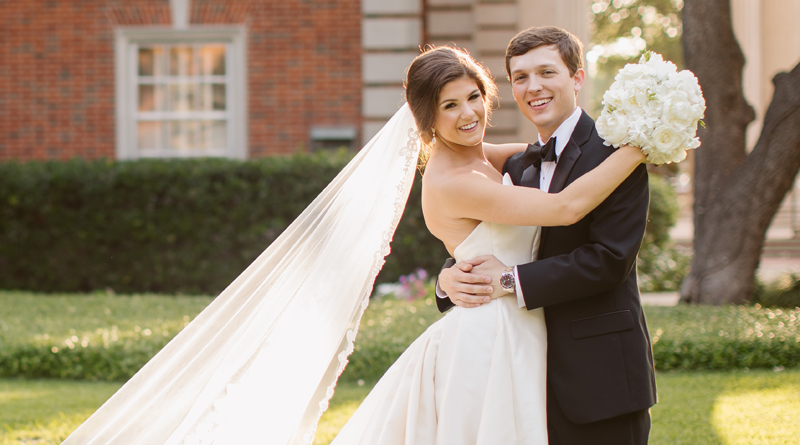 A formal seated dinner reception with dancing to music provided by The Project, a Dallas party band, followed at the Dallas Country Club. The groom’s family hosted the rehearsal dinner at the Park Cities Club on the eve of the wedding.

The bride was given in marriage by her parents. She was escorted down the aisle on the arm of her father. Taylor chose a white silk gown and veil, custom-designed by Patti Flowers of Dallas. Her dress, of imported Silk Mikado from Spain, featured a dramatic, curved, strapless neckline. Its molded bodice fit to Taylor’s natural waistline, complementing the full skirt of deep, rich pleats. The skirt fell to slipper-length with the train sweeping to court-length with tiny buttons extending the length of the gown. To complement her gown, Taylor’s cathedral-length veil of silk illusion was trimmed and adorned with Spanish lace.

Assisting the bride as maid of honor was Laura Cummings. Her bridesmaids included Brooke Erbe, Madeline Clyde, Dorothy Hino, Madison Ashley, and Sarah Kate Welch. Among the members of the house party were Elizabeth Martin, Camille Dameron, and Ramsey Pittman. The flower girl was Allie Sinclair.

The bride is a 2012 graduate of Highland Park High School. She received a Bachelor of Business Administration, triple majoring in business fellows, accounting, and marketing with a minor in Spanish, and a Masters of Accountancy from Baylor University where she was also a member of Kappa Kappa Gamma fraternity. Taylor is a tax consultant with Deloitte.

The groom is also a 2012 graduate of Highland Park High School. He received a Bachelor of Business Administration, with a double major of finance and economics, from Baylor University where he was also a member of Kappa Omega Tau fraternity. Jeff is a financial analyst with JP Morgan Private Bank.

Following their two week wedding trip to Europe, including Paris, Nice, France; Zermatt, Switzerland; and Monaco, Taylor and Jeff have made their home in Dallas.