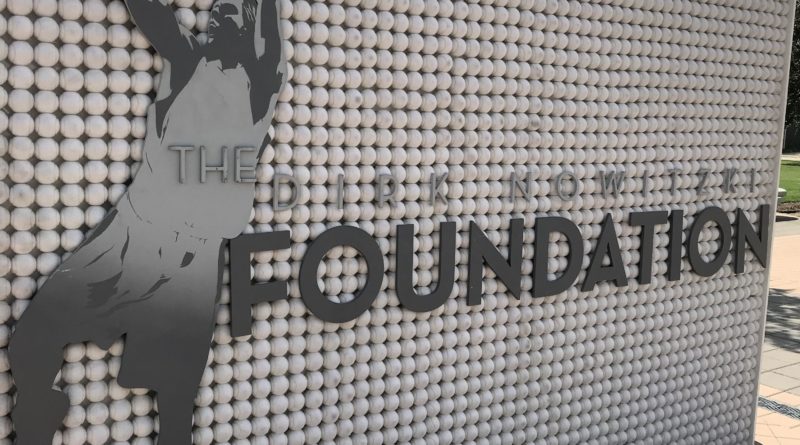 By day’s end, it was Dirk Nowitzki’s wife, Jessica, who made it to the final round of the Dirk Nowitzki Pro Celebrity Tennis Classic Sept. 15 at SMU.

And while Jessica Nowitzki and her partner, tennis pro Mitchell Krueger, lost to former professional Mark Knowles and his partner Camelia Marta, the Nowitzki’s were still the biggest winners of the day.

All proceeds from the event went to the Dirk Nowitzki Foundation, which awards grants to organizations focusing on children’s wellbeing, health, and education. And with a full house in attendance to watch Nowitzki – as well as tennis stars Knowles, Andy Roddick, Tommy Haas, Boris Kodjoe, and Steel Lafferty plus Nowitzki’s Dallas Maverick teammates Dwight Powell and Devin Harris – the final tally was something the 7-foot German had to smile about.

“This is the third time we’ve done it, and obviously last year was extremely special because we decided to [send the proceeds] to Hurricane Harvey victims,” Nowitzki said. “This year was just as fun. A lot of celebrities rolled into town for it, which is awesome. It’s been a great weekend with a lot of support from everyone.”

Nowitzki has made his charitable mark in Dallas ever since he arrived to the city in 1998. His Hero’s Baseball Classic, a pick-up baseball game held every year at Dr. Pepper Ballpark in Frisco, has been a success for several years and gathers proceeds for his foundation. And now, with his tennis event concluding its third year, Nowitzki has made yet another connection to the fans that adore him.

“Many children around the world need help to even have a chance to enhance their lives and realize their dreams,” he said. “With the Dirk Nowitzki Foundation, I want to help provide education, health, and well-being for these children, and to make a difference in their lives.”