When the persistent rain lightened up, the Scots took advantage with some defensive takeaways and some offensive dazzle during a victory over Mansfield Legacy.
Skip to content 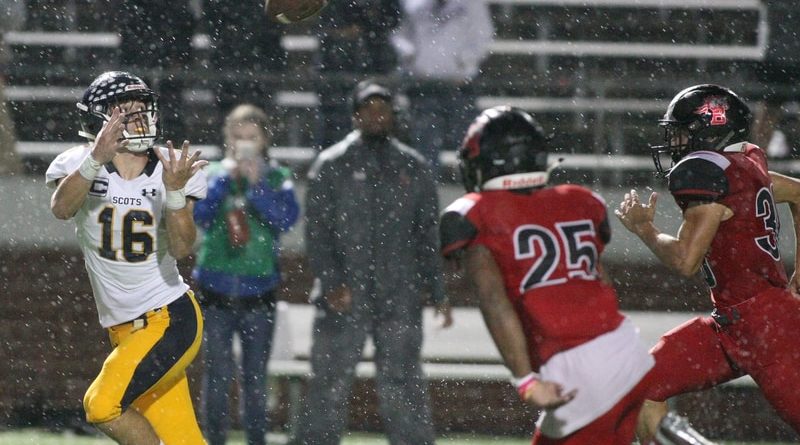 MANSFIELD — From stormy weather to athletic opponents, it seems nothing can slow down Highland Park these days.

When the persistent rain lightened up on Friday, the Scots took advantage with some defensive takeaways and some offensive dazzle, resulting in a 28-7 victory over Mansfield Legacy at a soggy Newsom Stadium.

Chandler Morris tossed three touchdown passes and ran for another score for HP, which looked sharp after a midseason bye week. The Scots (6-0, 3-0) extended their winning streak to 21 games dating to last season.

HP put the Broncos (2-4, 1-2) on their heels when two Legacy miscues led to a pair of HP touchdowns in a 33-second span late in the second quarter. Suddenly, a scoreless game turned into a 14-0 advantage for the Scots, who never looked back.

“We could open up our offense and throw the football when the weather let up,” said HP head coach Randy Allen. “Our guys made some great catches with a wet ball, and Chandler made some good throws.”

After both teams struggled early amid wet conditions, Hudson Clark jump-started the Scots late in the second quarter with an interception near midfield — the first of two picks for him in the game. Four plays later, Morris connected with Drew Scott on a 17-yard touchdown pass.

After Legacy fumbled the ensuing kickoff, HP’s Christopher Herrod recovered and set up the offense at the Legacy 20-yard line. Morris responded with two quick throws to Drew Dodge, the second one of which covered 14 yards for a score.

“The two turnovers in the last two minutes of the half — there’s your game,” said Legacy head coach Chris Melson. “Our kids responded and played their tails off, but those mistakes you can’t make against Highland Park.”

The Broncos cut the margin in half by starting the second half with an 86-yard drive that was aided by 30 yards in HP penalties. Cam Clark threw a 37-yard touchdown pass to Ife Adeyi to make the score 14-7.

However, the Scots responded immediately, covering 73 yards in just five plays. Finn Corwin reached the end zone on a 59-yard reception for his 10th touchdown of the year.

HP put the game away in the fourth quarter with a solid 12-play drive that finished with a 2-yard touchdown plunge by Morris, who has eight of HP’s 10 rushing scores this season.

“All around, we played a really tough football game,” Allen said. “They fought us hard. I’m glad we were focused. It took our best game to beat Legacy.”

The win highlighted another terrific effort by the HP defense, which allowed just 171 yards and forced eight Legacy punts. The Broncos completed just five passes, and workhorse running back Kaleb King managed only 13 of his game-high 79 rushing yards after halftime.

Meanwhile, Morris was 15-of-30 passing for 208 yards with three touchdowns and an early interception. Those numbers were more impressive considering that he didn’t complete any passes during a first quarter played in heavy rain and which included a 30-minute lightning delay.

It was the first regular-season meeting ever between the two programs, although HP previously topped the Broncos twice in the playoffs, including a memorable state quarterfinal matchup in 2016.

The Scots will return home next week to continue the District 6-5A Division I schedule against struggling Samuell.