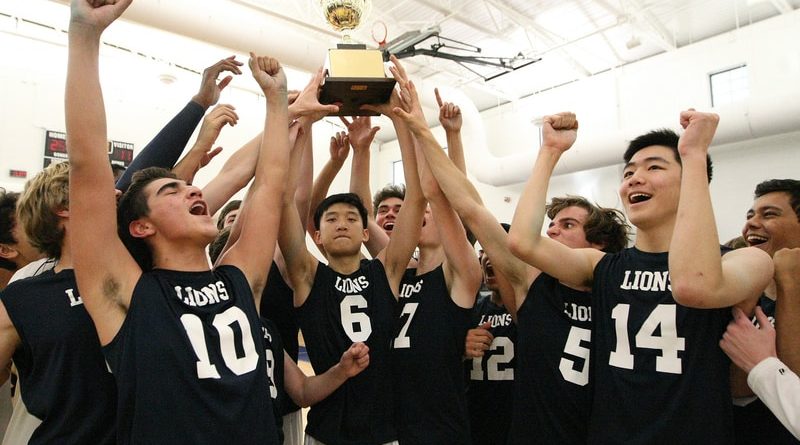 St. Mark’s was no stranger to coming from behind in the SPC volleyball tournament.

In the semifinals against Austin St. Stephen’s, the Lions were down two sets and still rallied to advance to Saturday’s championship match on their home floor.

In four previous matches this season, the Trojans had beaten beat the Lions soundly, losing only one set in the process.

“We finally got the monkey off our back against a very solid Trinity Valley team,” said St. Mark’s head coach Darren Teicher, who has led the Lions to five championships in his 10 years at the helm. “After coming from behind in the third set, our confidence soared.”

It looked like more of the same for St. Mark’s in the opening frame, as Trinity Valley went on an 11-point run midway through the set and eased to a 25-12 win.

The Lions were down late in the next set, but were able to battle back and tie the score after a crushing kill by junior Lincoln Dales. Albert Luo served out the set.

“We beat ourselves in that first set,” Dales said. “But our home crowd was huge, and loud, and we did not want to let them down.”

The third set was just as close as the second. Down 19-18, Tristan Doan came up with a huge block, and later, a tip by Sam Ahmed gave the Lions their first lead of the set at 22-21. St. Mark’s secured the set on a Trinity Valley service error.

“So many of our younger players came up big today,” Teicher said. “We knew we were in the driver’s seat heading into that fourth set.”

Doan and Toby Nwafor controlled what turned out to be the final set of the match, each coming up with several kills and blocks at the net as the Lions jumped out to 19-10 lead.

Nwafor, a middle blocker, defended a spike by Trinity Valley’s Tyler Wright that put St. Mark’s up 23-11. Another block by Luo gave the Lions match point, and Doan’s walloping kill cued the celebration.

“We always believed we could win, even after going 0-4 against them this season,” Teicher said. “How we played in that last set is what I’ve come to expect from this team, and I could not be more proud.”