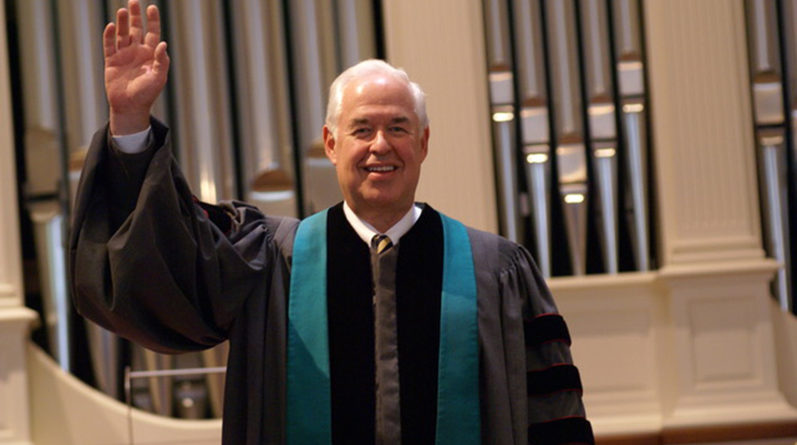 A memorial for former Preston Hollow Presbyterian pastor, the Rev. Blair Monie, will take place at 2 p.m. this Saturday, Nov. 17, at the church, 9800 Preston Road.

After Monie found out he was dying, he never showed any sense of worry or distress, those who knew him said.

Facing a pancreatic cancer diagnosis, the former Preston Hollow Presbyterian Church pastor remained confident in his faith and unwaveringly would say that while God once called him to preach, the Lord was now calling him home.

Terry Price, the church’s music director, said that was an incredibly powerful message for him to take from what could have been an incredibly sad time for someone in Monie’s situation.

“He was a true example of how to live and how to die,” Price said about his friend of 16 years. The Rev. Matthew Ruffner said that days earlier Monie asked for him to read from the prophet Isaiah – words that brought great comfort to the moment, “Even youths will faint and be weary, and the young will fall exhausted, but those who wait for the Lord shall renew their strength.” (Isaiah 40:30-31)

“I don’t think transitions are always as good as the one I had,” Ruffner said. “I don’t think it typically goes as smoothly, but Blair and I always talked about what a gift our friendship was.

“There are two types of people in the ministry world: pastors and professors. Blair was a rare breed with a world-class mind but also a pastor’s heart.” Those who knew him, say he was full of life.

Whether making a joke to cutting through tense moments or showing off his skills on the dance floor with his wife, Cyndy, Monie’s friends say they will remember him as gracious in every sense of the word and fun to be around.

His legacy will live on through a slew of recognition, such as the Blair R. Monie Distinguished Chair in Homiletics at Austin Seminary where he served as a distinguished pastor following his retirement, and the fund at Preston Hollow Presbyterian made in his name to bring in young ministers for two-year periods.

“His persona is going to live on in the church until all these people are gone,” Price said about the many who came to know Monie. “He had such an effect on all these people, young and old.”

Wick Allison to Speak at PHPC

Got a Story? Come to The Booth