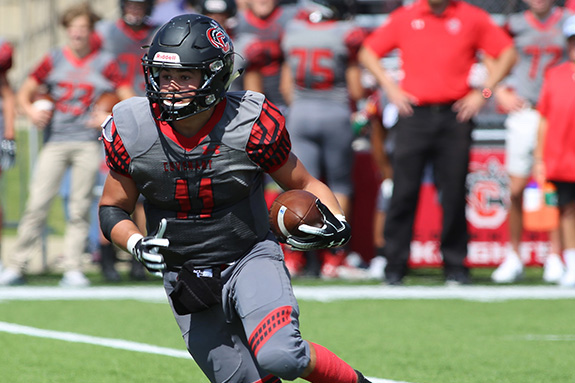 Covenant’s win on Saturday was about more than advancing to the second round of the TAPPS playoffs. It was about seeing years of hard work and on-field struggles pay off.

The victory achieved several goals for the Knights, a former state power in TAPPS six-man football. The program hosted — and won — its first-ever 11-man playoff game, plus secured a winning record in the process.

“I’m just so happy for everyone,” said Covenant head coach Jesse Olvera. “It’s been a great week here for the whole school community.”

Alec Scully rushed for 172 yards and three touchdowns, and also tossed three scoring passes. Cole Sellers caught all three of those first-half touchdown passes as the Knights took a commanding 49-8 lead at halftime.

Jack Spangler returned two interceptions for touchdowns during a 35-point barrage in the first quarter, taking advantage of several miscues by the shorthanded Eagles (3-8).

The Knights also assumed control in the first half during the first meeting between the two teams on Oct. 13, on the same field. That day, the Eagles rallied before Covenant held on for a 46-38 victory. The rematch wasn’t nearly as dramatic.

“We wanted to keep the pressure on and be physical,” Olvera said. “We ended up having a bye week on the last week of the season that allowed us to get healthy, and that was a blessing in disguise. We’re clicking and understanding the offense.”

After the teams exchanged early scores, Covenant took the lead for good on a 10-yard scoring strike from Scully to Sellers midway through the first quarter. Moments later, a bad punt snap gave the Knights the ball at the Texoma Christian 14, and Scully scampered into the end zone on the next play.

Scully rushed for a 78-yard score in the third quarter, and finished with 172 yards on 13 carries. Scully also completed 10 of 13 passes for 208 yards. Sellers led all receivers with five catches for 109 yards, while Hayden Anderson added three receptions for 78 yards.

Among the Covenant takeaways were an interception by Garrett Graham in Knights territory early in the second quarter, and a fumble recovery by Constantine Pappas in the third.

Texoma Christian had 69 penalty yards in the first quarter, compared to 38 total yards. For the game, the Eagles managed just 11 rushing yards and committed four turnovers. 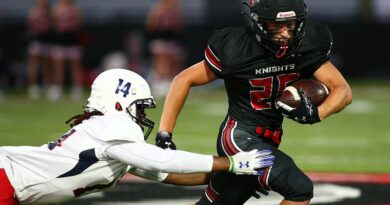 Covenant Shines in Debut Under Lights 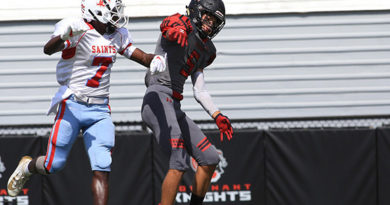 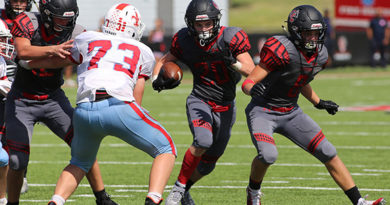