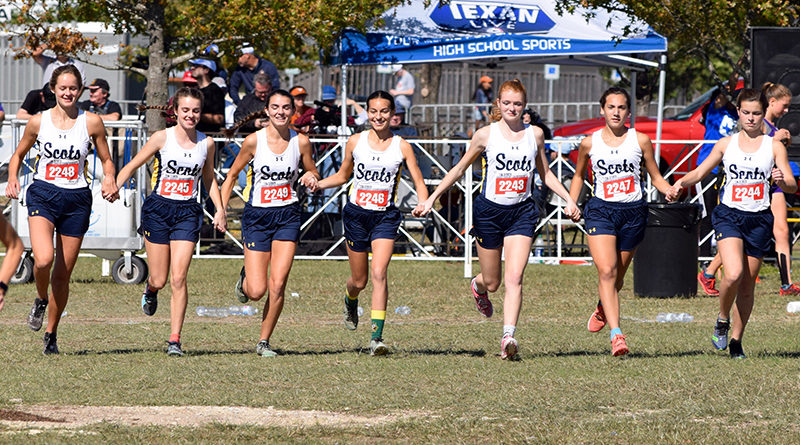 Susan Bailey could tell by the look on Sophia Oliai’s face that the Highland Park sophomore runner was going to have a good day.

Oliai finished fifth overall in the Class 5A state cross country meet on Nov. 2 at Old Settlers Park in Round Rock, just seven-hundredths of a second behind the fourth-place finisher — a marked improvement from her 15th place finish a year ago.

(ABOVE: After placing fourth in Class 5A (top) the HP girls will return six of their top seven runners next season. Photo: Zach Smith)

“It’s amazing, totally amazing,” said Bailey, the HP head coach. “It’s not easy doing well her freshman year and then trying to repeat. She was a determined young lady throughout the season.”

As a team, the Lady Scots finished fourth, yet another improvement following last year’s seventh-place finish.

“I’m never happy unless you get up on the medal stand, but am I proud of them? Of course,” Bailey said. “I want them to be rewarded for all their hard work. We’re very young, and we still have room to grow.”

Of HP’s seven runners, Stephens is the only senior, and the Lady Scots’ three fastest runners are underclassmen. So the future is bright for the team that has had at least one runner at the state meet every year since 1975.

What stood out about this team was its ability to learn and grow on the fly, Bailey said.

“Just being young and figuring out how to race at a high level makes a difference,” she said. “We were young last year and we’re still young this year, and I think they’re learning. That’s different from some of the other teams I’ve been a part of. I’m pleased with what they did.”