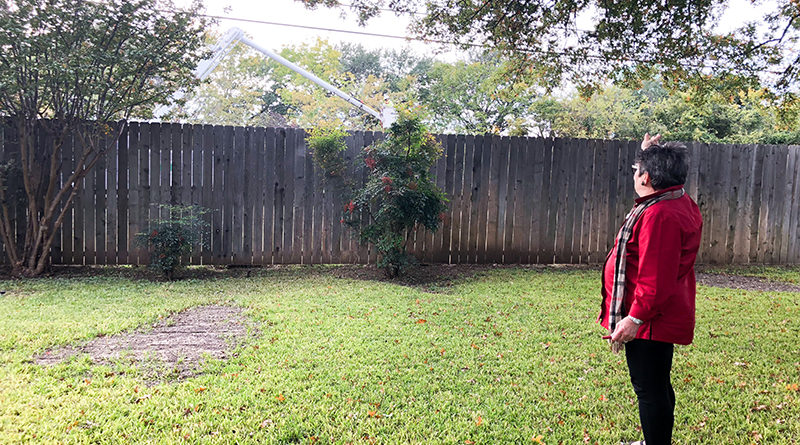 Part of Bonnie Brown’s morning ritual includes sitting at her dining room table by 5:30 a.m. and watching the sunrise as she studies the Bible.

The rustling of trees that lie in between her Melshire Estates home and the Dallas North Tollway play a part in the morning meditation.

However, whether those trees would be there much longer remained unknown as the newspaper headed to press on Nov. 12.

In late October, Oncor began cutting down dozens of trees in the North Dallas neighborhood, some of which were more than 30-years-old.

The company said new lines are being put in from Dallas to Plano along the Dallas North Tollway as part of a $17 million transmission line replacement project.

“The trees not only help in noise attenuation but provide so much more: They filter much of the dust, dirt, and exhaust emission caused by the DNT.” -Richard Brown

Those plans were recently put on pause after an impromptu meeting with the city of Dallas and the North Texas Tollway Authority (NTTA).

But reasons given for the pause varied based on who was asked.

Oncor officials said it was to both allow NTTA to study ways to provide better noise abatement stemming from the removal of the trees, as well as to give NTTA more time to review Oncor’s operational plans.

According to NTTA, the only concern was whether the work would impact the toll road.

NTTA media relations manager Michael Rey stressed that whatever happened was Oncor’s action alone, as it is their right of way, and that the trees only provide “visual barrier” and the wall is what assists with noise pollution.

In the interim, Oncor will continue to cut a 50-foot perimeter around the lattice towers, which is necessary for the safe removal of six towers and the installation of new monopoles. Crews also may trim some of the taller trees.

Brown and her husband, Richard, have both been vocal about the removal of the trees, as they were decades ago when they advocated for the wall to be built between their neighborhood and the tollway.

“At that time, Melshire Estates was the only residential area abutting the DNT that did not have a wall,” Richard Brown said. “We made it our mission to correct that glaring omission.”

While the neighborhood did get its wall, he said the NTTA cut costs by building a shorter wall than the study they paid for advised and justified it by planting a significant number of trees.

“The wall only attenuates noise. The trees not only help in noise attenuation but provide so much more: They filter much of the dust, dirt, and exhaust emission caused by the DNT,” he wrote in a statement.

When asked what the best resolution to the problem might be, the Browns and Oncor officials agree: Build a taller wall.

NTTA officials said they’re not considering that as an option.

“The sound walls are good. That is not going to change,” Rey said.