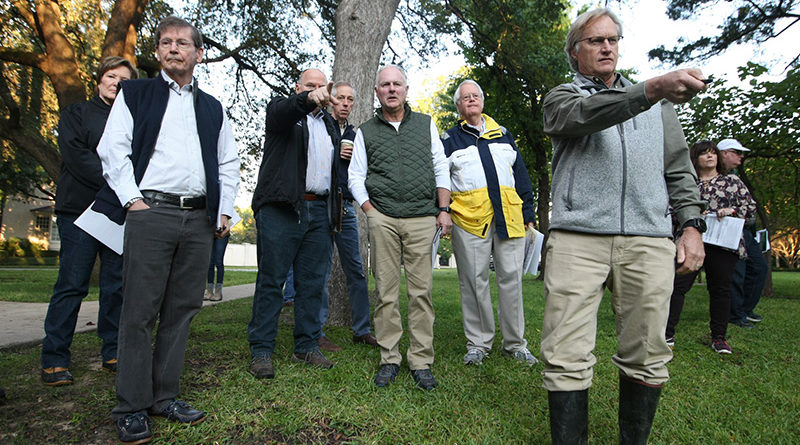 On a fall Saturday morning, the community’s love for Hackberry Creek went on full display.

Portrait takers, dog walkers, and picnickers were among those using the parkland along the creek, while a troop leader led Boy Scouts on a nature walk, looking out for poison ivy and other plants.

Highland Park Town Council members went on a tour as well – a fact-finding effort aimed at helping them better evaluate the area’s flaws and potential.

“Are we removing trees,” Mayor Pro Tem John McKnight asked as consultant Stan Cowan guided the tour, pointing out where erosion is undercutting retaining walls and places where the creek may need new plantings to secure banks.

“No. Not unless they are a hazard,” Cowan said.

Cowan is managing partner of MESA, the landscape architecture, planning, and urban design firm the town hired to develop a master plan for a mile-long stretch the creek corridor. The plan covers an area from near Byron Avenue generally southward to Armstrong Avenue, including Prather and Davis parks, but excluding locations that cross private property.

The town also has budgeted $5.8 million over 10 years in the Capital Improvement Program for projects.

Town administrator Bill Lindley said the goal would be to match the look of materials already in the creek area as damaged retaining walls are restored or replaced. The goal: “to keep the charm of walls that have been there 80 years.”

Some areas would remain untouched such as where exposed tree roots are doing a great job of naturally maintaining the creek bank – while others such as aging bridges could see some restoration.

New plantings, using native plants, could add beauty to some areas as well as a buffer from traffic on nearby streets.

Outfalls, where storm drains open into the creek, would remain, but could be addressed to make them look less industrial.

Safety issues – such as existing railings that don’t meet standards – would be addressed.

Cowan suggested the town may want to replace a tennis court in Prather Park with a gathering place or amphitheater for concerts or children’s theater.

“I’m intrigued by the idea that (that area) would be accessible to more residents,” Mayor Margo Goodwin said.