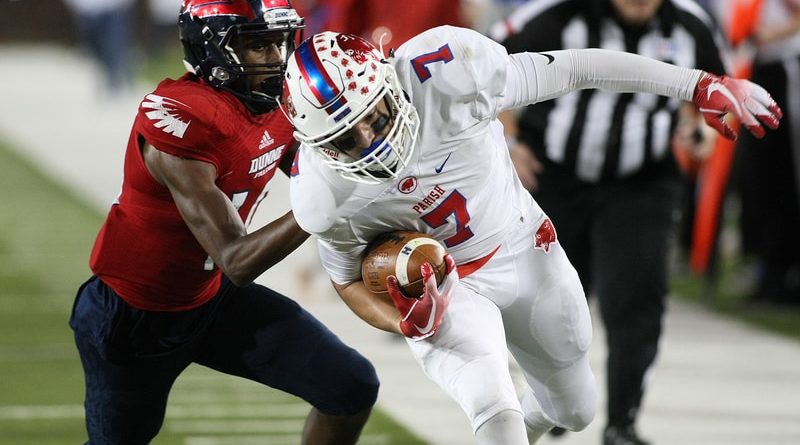 A change in conditions produced the same result for Parish Episcopal in its rematch against Bishop Dunne.

The Falcons used an aggressive defense and timely big plays on offense to defeat the Panthers 31-20 on Saturday at SMU’s Ford Stadium, eliminating Parish in the TAPPS Division I state semifinals.

Bishop Dunne topped the Panthers (9-4) by a 16-7 score in a steady downpour on Oct. 12, and this time repeated the feat in ideal weather. The Falcons (10-3) have won seven straight games and will meet another district rival, Bishop Lynch, next week for the state title.

“You have to give them credit for unbelievable defense. It’s tough sledding for any offense,” said Parish head coach Daniel Novakov. “We stuck to our game plan and settled in a little bit in the second half. Some guys stepped up and made some plays.”

Dual-threat quarterback Simeon Evans tossed two touchdown passes and also ran for a pair of scores to pace the Dunne offense. Both scoring passes went to Jaden Hullaby, who tallied a game-high 146 rushing yards on 24 carries.

[rl_gallery id=”192559″]The Panthers became the first team to score 20 points against the Falcons all season, but still played from behind almost the entire game. Sophomore quarterback Preston Stone threw for 296 yards and three touchdowns, two of which went to Tyler Hamilton.

Twin brothers Cameron and Kahlil Overton combined for 12 receptions and 184 yards in their final game for Parish. Cameron, who scored three times during last week’s upset win over Fort Worth Nolan, caught a 22-yard scoring pass just before halftime to pull the Panthers to within 14-7.

However, Dunne kept Stone scrambling throughout the game with few throwing lanes. And perhaps more importantly, when Parish did score, the Falcons always had an answer.

Early in the third quarter, for example, Dunne took advantage of excellent field position and extended the lead to 21-7 on a 32-yard touchdown strike from Evans to Hullaby.

The Panthers cut the margin to 21-14 on a 21-yard connection between Stone and Hamilton to end the third quarter. But again, the Falcons stretched their advantage on a Tucker Littleton field goal followed by an Evans touchdown plunge on consecutive possessions.

Earlier, the two teams traded interceptions during a scoreless first quarter — one apiece for Parish’s Kaleb Culp and Dunne’s Logan Wilson. The Falcons capitalized for their first touchdown, then scored again following a 12-play, 95-yard drive that consumed a large chunk of the second quarter.

The loss ends Parish’s most successful season since transitioning to the top classification in TAPPS a few years ago. Novakov said it’s a sign the program is trending in the right direction.

“We wanted to go all the way, so we’re not taking moral victories, but I’m really proud of the seniors and the leadership they showed,” Novakov said. “It all started with the culture they set. They were motivated and driven to get to this point. This gives us something to build on.”

Novakov Takes Over for Nady at Parish