After requiring a miraculous comeback last week, the Scots made it seem surprisingly easy during a 43-21 victory that puts HP in the title game once again.
Skip to content 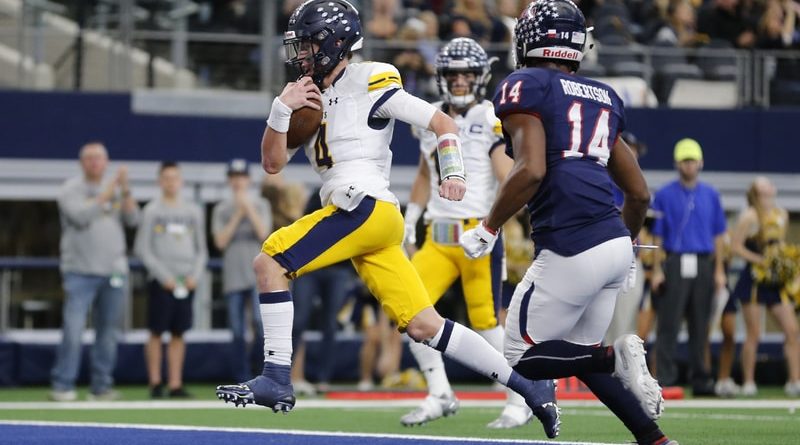 Chandler Morris was responsible for all six touchdowns during Highland Park’s 43-21 win over Ryan in the Class 5A Division I semifinals on Saturday. (Photo: Melissa Macatee)

ARLINGTON — It takes a special team to win three consecutive state championships. After Saturday’s demolition of Denton Ryan in the Class 5A Division I state semifinals, these Highland Park Scots certainly look the part.

After requiring a miraculous comeback last week in the quarterfinals, the Scots made it seem surprisingly easy during a 43-21 victory at AT&T Stadium that puts HP in the title game once again. The Scots will face upstart Alvin Shadow Creek at noon on Dec. 22.

HP toppled Ryan in the semifinals for the third straight season, and this triumph was the most convincing, as the Scots dominated on both sides of scrimmage.

Junior quarterback Chandler Morris threw for 265 yards and three touchdowns — all to Bennett Brown — while also rushing for three scores to lead the way.

Meanwhile, the HP defense held a potent Ryan attack to its lowest scoring output of the season while forcing a pair of key second-half turnovers.

The Scots (15-0) extended their winning streak to 30 games overall, and tied the school record for wins in a season. If HP wins a sixth state championship next week, on the same field, this team would stand alone in the record books.

“We took control of the game and started to wear them out,” said HP head coach Randy Allen. “They have a lot of two-way starters. We were trying to keep the ball on offense so we could maintain possession.”

Unlike a week ago — when the Scots rallied late for a 42-35 victory over Tyler John Tyler — the heroics started early for HP against the Raiders. On the opening drive, Morris hit Brown on a 31-yard touchdown strike on fourth-and-long, giving the Scots a lead they never relinquished.

Ryan threatened later in the first quarter, when T.J. Walker intercepted a pass in the end zone. A trick play followed, with Keori Hicks finding Jamarion Robertson for 50 yards. But the Raiders (14-1) couldn’t take advantage of the momentum.

Instead, an 11-play 80-yard drive by HP culminated in a 4-yard scoring run by Morris, who finished with 75 rushing yards on 14 attempts.

“We couldn’t get the momentum because Highland Park took the momentum,” said Ryan head coach Dave Henigan, a former HP assistant. “They took the ball away from us and we got a little bit tired. They made more plays than we did, and they don’t make mistakes.”

The teams traded touchdowns before halftime, with Ryan scoring on a 4-yard run by Drew Sanders and HP answering with a 7-yard strike from Morris to Brown.

The Scots extended the lead in the third quarter thanks to a pair of defensive takeaways. Colby Hopkins recovered a fumble on the opening possession after halftime, leading to another long HP drive and a 5-yard touchdown run by Morris. He set up the score by scampering for 45 yards on fourth down.

The Scots capitalized on another Ryan miscue when Harris Feferman recovered a muffed punt at the Ryan 29-yard line. Morris followed with another touchdown plunge to stretch the advantage to 36-14.

“Our defense played great,” Allen said. “Our guys tackled well and competed well for 50-50 balls. They made some big plays throwing the ball, but our guys were in position to make plays most of the game.”

The HP margin increased to 43-14 on HP’s next possession, when Morris and Brown hooked up on a 15-yard score. It was the sixth touchdown drive of 60 or more yards for the Scots.

Ryan’s most impressive possession came with the game already out of reach in the fourth quarter. A 12-play, 78-yard drive ended with a short touchdown pass to Sanders from Seth Henigan. Sanders was responsible for all three touchdowns for the Raiders.

The Raiders have a 42-3 record during the past three years, with all three defeats coming against HP on the doorstep of the state championship game.

Benner Page rushed for a game-high 97 yards on 19 carries for the Scots. Finn Corwin had six catches for 96 yards, and Ben Smith added seven grabs for 84 yards.