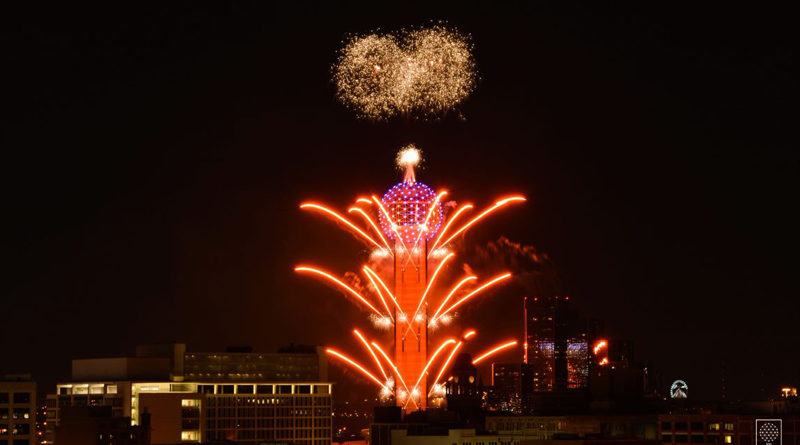 An estimated 15,000 pounds of fireworks and more than 1,700 hours will culminate tonight from Reunion Tower for the Over the Top NYE 2018 fireworks show presented by Southwest Airlines.

Beginning at 11:30 p.m. Dec. 31, vibrant hues of pink and teal will tease the beginning of the show. Just before the clock strikes midnight, the skyline will go dark to set the scene for 10 minutes of combined pyrotechnics and LED lighting, featuring more than 4,000 pyrotechnic special effects with the downtown skyline as its backdrop.

“We are excited that Reunion Tower, and their partners, are coming together to present this spectacular
show to the city,” Shalissa Perry, chief marketing officer, Downtown Dallas, Inc. said. “This has become a Dallas New Year’s Eve tradition and we’re thrilled that so many iconic Downtown buildings will be participating in this initiative.”

“We are pleased with how our city has received this show and how its residents are thrilled to celebrate New Year’s Eve with a wonderful vantage point of the fireworks,” Dusti Groskreutz, president of Reunion Tower, said. “We hope this new tradition is creating special memories for all those who take part in watching the show, in-person or at home from their televisions or social media.”

The 10-minute show will have three themes: Super Tower Power, Love and Romance, and Celebration.

“Everything is big in Dallas, so we had to have an over the top event here at Reunion Tower,” Groskreutz said.

Matt Peterson, creative director with Melrose Pyrotechnics, said for the past three years his company has continued to add new elements to the show at Reunion Tower. This year, he said additions will include a better collaboration with the fireworks and lighting show, a sunset show that will shoot off from four different points on the tower, and enhanced color changing effects – both horizontal and vertical.

Melrose Pyrotechnics has been in the fireworks industry for years and has set up displays across the globe.

The show at Reunion Tower, Peterson said, included more than 1,500 hours of work.

“There’s something for everyone; whether you’re young or older, we want you to walk away feeling connected to what we’ve done,” Peterson said. “Essentially, that’s what makes us smile at the end of the day. It’s hard work, but being able to entertain like that and make people happy and smile and to walk away with a memory … we’ve done our job.”

If you’re looking to catch the show, the best viewing vantage points will be on the west side of the Trinity River, along the levees and Trinity Overlook Park. Listen along to the musical score with the simulcast on ALT 103.7 FM or watch the live stream on Reunion Tower’s Facebook page.

As the show’s official media partners, NBC 5 and Nexstar Media Group will bring the heart of Dallas into thousands of homes by celebrating the arrival of 2019 with a live New Year’s Eve production, Lone Star NYE Live on Monday, Dec. 31 from 11:30 p.m. to 12:30 a.m. 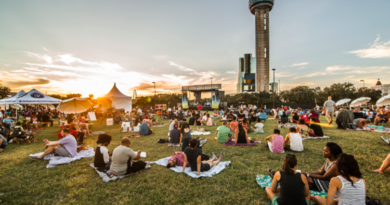 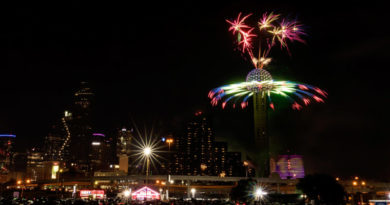 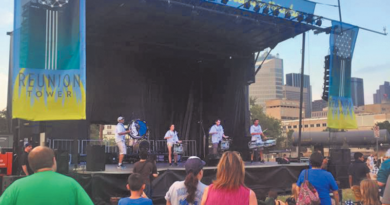 One thought on “Reunion Tower to Light Up NYE with 15,000 Pounds of Fireworks”