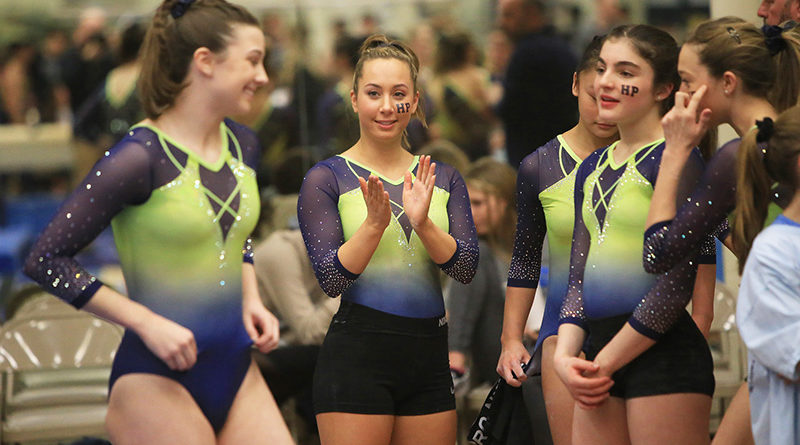 Sibling gymnasts Katherine and Kennedy Downing have watched one another perform hundreds of routines. But this year, the stakes for every tumble and flip are higher than ever.

(ABOVE: Katherine Downing claps during a meet. Photos by Chris McGathey)

Katherine is a senior at Highland Park High School, while Kennedy is a freshman. That makes them teammates for the first, and probably last, time. And so both sisters want to make it count.

“We get to see each other get new skills and compete together,” Katherine said. “We motivate each other because we’ve got kind of a competitive sister drive.”

Although they share a broader common goal — helping the Lady Scots reach the Texas High School Gymnastics Championships in late April — they’re also engaged in a friendly sibling rivalry that has proven mutually beneficial. No matter your score, you don’t want to be beaten by your sister.

“There’s no room for mistakes,” Katherine said. “We’re pretty neck-and-neck. If you mess up once, that might be it.”

The Downings come from an athletic family. Their oldest sister played volleyball at Highland Park, while their father was a football player and their mother a gymnast.

“They get along better than any of the other sister pairs I’ve had.” -Brandi Wren

“They get along better than any of the other sister pairs I’ve had,” said HP head coach Brandi Wren. “Usually sisters squabble, but that’s not the case with Katherine and Kennedy. They’re very positive kids.”

Kennedy, who has a significant height advantage over her older sister, prefers uneven bars and balance beam while Katherine specializes in floor exercise and vault. Katherine said that while she used to teach new skills to Kennedy, the pupil has now surpassed the mentor in many regards.

“I try to have an open mind because she knows what she’s talking about,” Kennedy said. “It’s fun to see how much we can grow together.”

The Lady Scots will host their regional meet on April 16-17, with the state meet scheduled for the following week in College Station.

Both sisters stressed the importance of qualifying for state as a team, something HP has done every year since 2013. That would provide a perfect cap to a memorable season that has seen their bond grow deeper through a shared love for gymnastics.

“We’re working really hard to make that happen,” Katherine said. “I think we’ve gotten closer. We have two more hours a day to spend together.”

Basketball is a Constant for Younger Jankovich