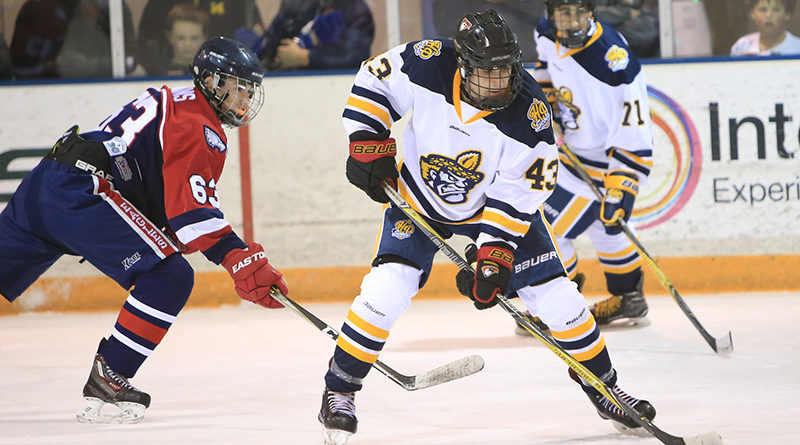 Robby Sours and his Highland Park teammates are trying to increase the popularity of hockey on campus.

They know that — like any other sport — winning is a great way to boost exposure. So when the Scots surged to a runner-up finish in the top division of the AT&T Metroplex High School Hockey League in February, it was a huge step in the right direction.

Sours, a junior, led the league with 25 goals in 18 games during the regular season, while teammate Alex James added 16. As a team, HP finished in third place in the league’s Varsity Gold division and reached the championship game after upsetting McKinney in postseason play.

“It’s been a long time coming,” said HP head coach Jeff Lewin. “I don’t think anyone expected it. I couldn’t be more proud. It speaks to the kids really taking ownership of the team.”

“He has one of those old-school hockey mentalities. . . When he gets hit, it motivates him to go out there and score.” -Jeff Lewin That’s especially impressive considering the Scots’ recent history. In 2017, HP won only one game and finished in last place in the second-tier Varsity Silver division. Last year, the Scots dropped down to Varsity Bronze and barely made the playoffs.

“Being exposed to the higher competition made everybody a lot better,” Sours said. “I was motivated this year. I really wanted to see our team do well. I was kind of driven by that.”

Sours is one of the more experienced players on the squad. He picked up hockey more than a decade ago when his parents became Dallas Stars season ticket holders. During his freshman year, he gave up soccer to focus on hockey full-time.

About half of HP’s players compete on select teams year-round in addition to playing for their school. For example, Sours practices an extra three times each week, and plays an extra game every week, for the Dallas Penguins. He will travel to a national tournament in April in San Jose, California.

“He raises the level of play for everybody else,” Lewin said. “He has one of those old-school hockey mentalities. He’s not one to shy away from confrontation. When he gets hit, it motivates him to go out there and score.”

The Scots don’t play any traditional home games since there’s no suitable ice rink in the Park Cities. However, the number of local youth hockey players continues to rise.

So Sours and his teammates will continue to wear their hockey sweaters on game days and tout their accomplishments, in the hopes that fan support will follow.

“It’s fun to watch our games,” he said. “When people come out, we play a lot better.”