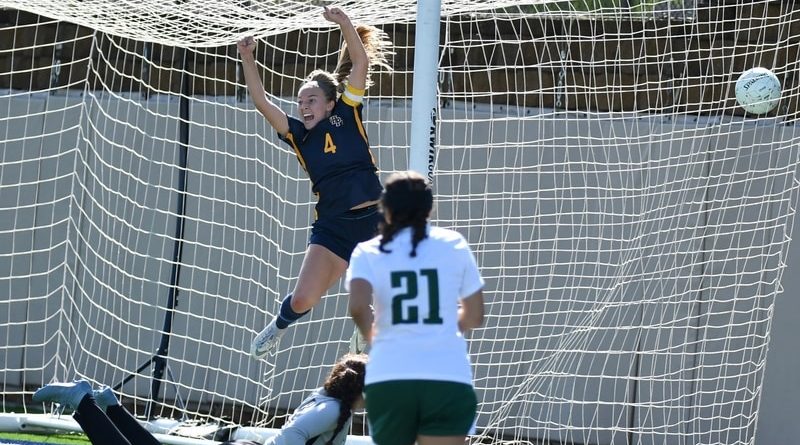 Megan O’Neal and Highland Park had plenty to celebrate during a 4-1 win over Kingwood Park on Thursday. The Lady Scots will play Mansfield Legacy for the Class 5A state title at 11 a.m. Saturday. (Photo: Laura Franks)

GEORGETOWN — Highland Park looked like a team on a mission Thursday, when it beat Kingwood Park 4-1 in a Class 5A semifinal at Birkelbach Field.

The mission: to become the first program in Texas — girls or boys — to win seven state soccer championships. The Lady Scots (25-1-3) are now just one win away. It’s why many of the players passed up potential opportunities with U.S. Soccer Development Academy programs.

“I wouldn’t trade it for the world,” said junior forward Presley Echols, who scored twice as HP led 3-0 at halftime, putting the high-powered Panthers (26-2-2) on their heels.

Maja Davison opened the scoring in the 12th minute when she received a long pass over the top of the defense from senior midfielder Halley Ray. Dribbling toward the goal from a tight angle on the right side, Davison kissed her shot off the crossbar and in.

“It was really cool and really exciting,” Davison said. “Me and Presley have been freaking out, and we were excited for this game.”

Megan O’Neal doubled the advantage in the 35th minute, tapping in a rebound after Ray put a header off the crossbar. Echols, a University of Texas commit, tucked away the third goal off a long pass from O’Neal. Echols and O’Neal connected again for the fourth goal, making the score 4-0 in the 71st minute.

“Me and Megan have been playing together since we were like 6 (years old), so we know how each other work,” Echols said. “Her ball was perfect and it was an easy goal to finish.”

That brought Echols’ goal tally this season to 52, to go with 28 assists in 29 games. HP head coach Stewart Brown said that he has three “No. 1 rules” for his program — don’t get hurt, have fun, and don’t be boring — and all of them were followed on Thursday.

“We want to play soccer that is fun, flowing, attacking,” he said. “We’ll defend when we have to, we’ll get dirty and gritty when we have to, but ultimately we want to create a piece of art on this surface and I think we did that today.”

Kingwood Park forward Allie Byrd made it 4-1 in the 73rd minute, but that hardly put a damper on the Lady Scots’ mood. All that mattered was getting to Saturday, when they’ll play Mansfield Legacy for a fourth championship in five seasons.

Echols’ sister Lauren starred on the 2015 championship team, a family connection that helped lay the foundation for this latest HP run. Presley Echols faced a decision in 2018, when U.S. Soccer implemented its girls academy program with the mandate that players not compete for their high schools.

There are three Development Academy programs in the Metroplex with Under-15, U-16/17 and U-18/19 age groups: FC Dallas, Solar Soccer Club and Dallas Texans.

“It wasn’t really a hard decision for me because I always knew that my older sister played for Highland Park and I knew that her experience was amazing,” Presley Echols said.

Davison said she had to make the same choice, as did most of the team’s starters. While many dominant programs around the country have taken big hits because of the rule change, the HP tradition of excellence continues. Brown said there are only two girls at the school who chose DA over high school soccer.

“They love playing with each other and for each other and for our community,” he said. “Highland Park is a one high school town. Everybody gets behind all those sports. They love that. They walk through the hallways and they’re superstars, especially this week.”

On Saturday, the Scots can become the most dominant high school program in Texas soccer history.