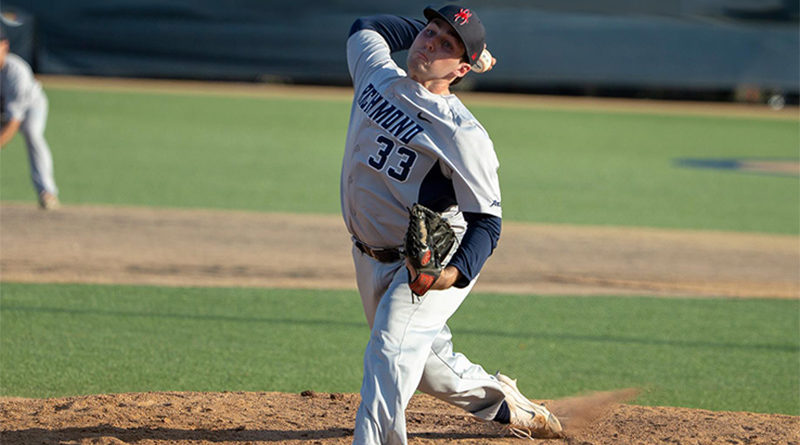 As a starting pitcher almost exclusively throughout high school and his first two years of college, Layne Looney never envisioned himself as a closer.

(ABOVE: Layne Looney hopes to play professional baseball when he’s finished at Richmond. Photos by University of Richmond Athletics)

So finding his comfort zone in his new role at the University of Richmond has required some mental and physical adjustments, and the ability to endure some bumps in the road.

As his college career winds down, the former Highland Park standout has mostly thrived pitching at the end of games rather than the beginning — even if it’s only for one inning at a time.

“It was definitely a change of pace,” said Looney, who was an all-state pitcher for the Scots in 2014, when he threw four no-hitters. “I don’t think I ever really expected it.”

“I had to learn that mindset. It’s nice to be able to throw multiple times a week. It’s a different kind of role, but I like it.” -Layne Looney

Following an injury-plagued freshman campaign, Looney had a breakout season as a starter in 2017, during an otherwise lackluster year for the Spiders. He made 14 starts and finished with a 3.21 earned-run average in 61.2 innings, improving as the season progressed.

Then his summer-league coaches decided to try him in the bullpen. Richmond pitching coach R.J. Thomas felt the right-hander might be a better long-term fit there, too.

“They decided that I could be better used at the back end of the pen,” Looney said. “I had to learn that mindset. It’s nice to be able to throw multiple times a week. It’s a different kind of role, but I like it.”

Looney responded well to the change, finishing with a 0.60 ERA and eight saves in 23 relief appearances as a junior. He was recognized with first-team Atlantic 10 all-conference honors and was drafted by the Chicago Cubs in the 18th round of the Major League Baseball draft. Rather than signing with the Cubs, however, he decided to come back to Richmond to earn his degree and finish his college career. Looney has struggled with consistency and control this spring but still has posted several strong outings.

“It’s been a year where I’ve learned a lot of lessons,” said Looney, who hopes to still catch on with a professional organization later this year.

Eagle to the Rescue

UP Names Citizen(s) of The Year