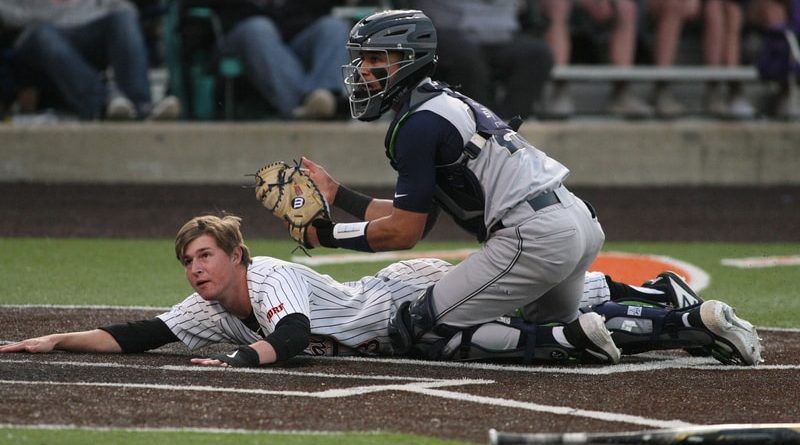 Tyson Pointer and Jesuit led in Game 3 before Rockwall rallied to eliminate the Rangers in a Class 6A Region II area round playoff series. (Photos by Chris McGathey)

Jesuit appeared as though it might repeat its winning formula in the area round of the Class 6A Region II playoffs. However, Rockwall had other ideas.

The Yellowjackets rallied from a 1-0 deficit in the final two innings to earn a 2-1 victory over the Rangers in Game 3 of the series on Saturday in McKinney.

The walk-off win spoiled a solid pitching performance by Jesuit’s Gavin Perryman, who did not allow a run through five innings. Jack Lynch’s home run in the top of the third inning had given the Rangers (26-13) the narrow advantage.

Jesuit was eliminated in the third game of an area round series for the second consecutive season, after suffering the same fate last year against Conroe Oak Ridge.

After dropping the series opener 5-2 on Thursday, the Rangers bounced back with an impressive 6-2 victory on Friday to keep their season alive. Jalon Mack and Caden Carlson homered to back the stellar pitching of Lynch and Ben Shepherd, who combined for 11 strikeouts.

Prior to the Rockwall series, Jesuit had won 10 of its previous 11 games, including a three-game postseason series victory over Sachse in the bi-district round.

Rangers Kick Off at Meintser Tourney