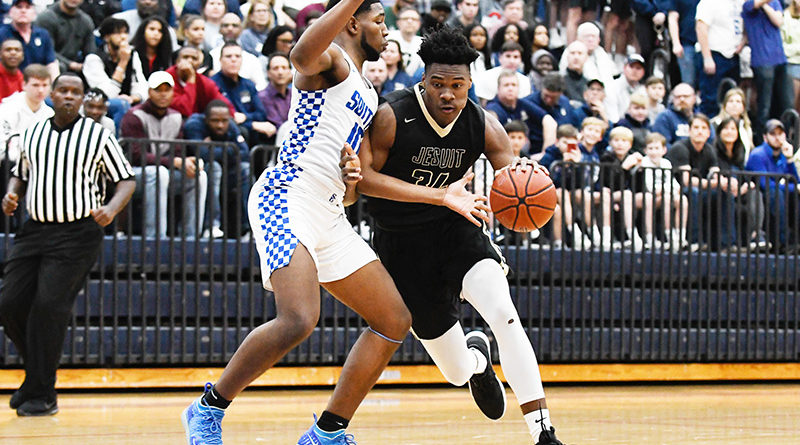 All along, Julius Marble knew he belonged in big-time college basketball. It just took a little while for everyone else to share that vision.

(ABOVE: Julius Marble rebounded from an injury-plagued junior year to average almost 17 points per game as a senior. Photos by Rob Graham)

Marble’s whirlwind senior season at Jesuit turned into a recruiting frenzy that ended with him signing a scholarship with Michigan State — only weeks after the Spartans played in the Final Four.

By the time coaches from major college programs began swarming Jesuit practices and games late in the season, most elite prospects from the Class of 2019 already had signed their scholarship offers. But Marble was still playing for a spot, and his suitors were willing to accommodate him.

“It was very unusual,” said Jesuit head coach Chris Hill. “Most of those guys are usually finished by then. I thought it took a lot of guts for him to wait. That speaks volumes for his confidence.”

I had to spend time getting into basketball shape and getting back into form. That was tough for me, but it worked out in the end. -Julius Marble

The versatile 6-foot-8 forward had been a top recruiting target at the Division I level before breaking his foot early in his junior season. Eight weeks later, he was cleared to return to action and aggravated the injury.

After playing in just 14 of the Rangers’ 35 games that year, he missed most of the subsequent summer AAU campaign, too. In total, the injury sidelined him for about six months, and some scholarship offers suddenly disappeared.

“That threw me off. I had to spend time getting into basketball shape and getting back into form,” Marble said. “That was tough for me, but it worked out in the end.”

As a senior, Marble averaged 16.8 points and 9.7 rebounds per game while shooting 56 percent from the floor. In Jesuit’s three playoff games, those averages jumped to 24.7 points and 14 rebounds.

“Once he got his conditioning and his leg strength back, he came back better than he was before,” Hill said. “He didn’t just show off or try to pile up stats.”

Reflecting his team-first attitude, Marble insisted on holding off on campus visits until after Jesuit’s season ended with a loss to South Garland in the Class 6A Region II quarterfinals in late February.

His trip to East Lansing, Michigan, coincided with the Spartans’ victory over rival Michigan in the regular-season finale on March 9, which clinched a Big 10 conference title. That’s when he knew he wanted to play for Hall of Fame coach Tom Izzo.

“He was very honest with me about my opportunity,” said Marble, who later marveled as his future teammates reached the national semifinals. “They just got ready and got hot at the right time.”