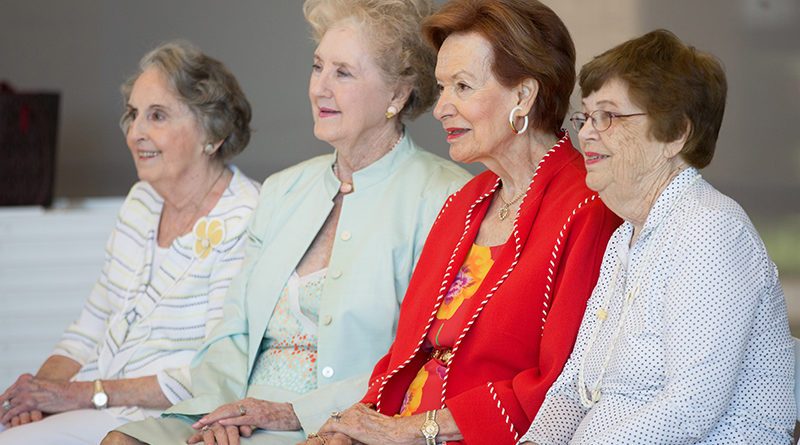 Mary Ann Hyde was the belle of the ball at The Hockaday School reunion – with a caveat attached. This was no ordinary school reunion.

Hyde reunited on April 26 with many friends from the class of 1949, and in the middle of her 70th high school reunion, also received The Hockaday Medal Award – the school’s lifetime achievement honor and highest award the Hockaday Alumnae Association can bestow upon a former student.

More than 600 alumnae were in attendance to see Hyde received the award – a testament to her ongoing endeavors for the prestigious Dallas all-girls school.

While the world has changed substantially since 1949, Hyde, other than in age, has not. She has made it her life’s mission to give back through involvement with Hockaday girls and numerous charitable contributions.

There are many ways of giving back – of making the world a better place – by serving people and organizations that exist to improve lives. -Mary Ann Hyde

Hyde and her husband moved to Venezuela following their wedding to work with Sun Oil Company, and Hyde immediately became active in the country’s Children’s Service League. When the couple moved back to the United States, Hyde served on the boards of Thomas Jefferson University Hospital in Philadelphia, the Bryn Mawr Hospital, the Phoenix House for abused children, and the Chamounix Mansion youth hospital.

Upon returning to Dallas in 1983, she served as president of the Hockaday Alumnae Association. She’s serving on the SMU Executive Board of the Meadows School of Arts and is a resident of Presbyterian Village North senior living community.

If she had more time, she might do more, she said.

“I am privileged beyond measure, and cannot express enough how grateful I am for this recognition,” she said. “Hockaday definitely inspired me to become involved in numerous charities after I graduated.” Among other highlights, Hyde chatted with two women at the reunion that shared her first-grade classroom. Their presence at the reunion, she said, shows the impact Hockaday had and still has on its students.

“I feel that the school truly prepares young girls to meet their future with skills and confidence,” Hyde said. “I have always valued the friendships I made and the education I received at Hockaday. I can say without a doubt that [the school] continues to play a vital role in the development of young women. It certainly influenced my life.”

Since the award was established in 1977, one recipient has been chosen every year. This year’s choice was easy, school officials said in a press release, explaining that Hyde was “without a doubt” the worthiest candidate.

Award in hand, Hyde will continue doing what she loves.

“There are many ways of giving back – of making the world a better place – by serving people and organizations that exist to improve lives,” she said.

Fall-ish Fun For The Family