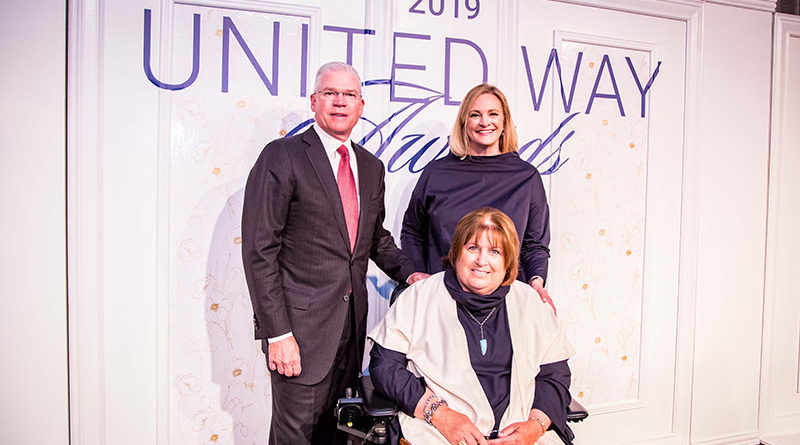 Under the inspiring leadership of Rich and Mary Templeton, United Way of Metropolitan Dallas is on track to reach a financial milestone, allowing the organization to put opportunity in the hands of more than one million North Texans.

“United Way is the unifying, driving force to get lasting results for Dallas,” said Rich Templeton, CEO of Texas Instruments and 2018-19 Campaign co-chair. “Mary and I have been honored to lead this campaign, mobilizing volunteers and companies toward action to improve education, income, and health in our community.”

By the time the fiscal year ends on June 30, United Way’s annual campaign will have raised $61.6 million. Two-thirds of the total ($41.1 million) will go to directly support United Way’s work in education, income, and health – the building blocks of opportunity.

United Way of Metropolitan Dallas celebrated the successful 2018-19 campaign by recognizing some if its remarkable volunteers and donors who were instrumental to the overall effort.

With Beyonce’s “Crazy in Love” pouring out of the speakers, guests and recipients were ushered into a lavish party at the Hilton Anatole June 6 where tabletops were adorned in peach linens and centered with blue and white hydrangeas.

“Once again philanthropy is alive and well,” Jennifer Sampson, McDermott-Templeton president and CEO of United Way of Metropolitan Dallas, said in greeting. Today, she said they were celebrating all who made the 2018-19 campaign a success.

“If you studied the history of Dallas and the impact J. Erik had, it’s very humbling to receive an award in his name,” McDonnough said at the reception.

McDonnough has compiled a remarkable record of inspiring service to United Way. He has previously served as chair of the Campaign Cabinet and also served as a member of the Tocqueville Cabinet and Resource Development Committee. McDonnough currently serves on the United Way Foundation Board and the Community Impact Committee and is a vice chair for the Unite Forever Campaign.

He is a loyal contributor who has been a Tocqueville donor since 2005, and he is a supporter of the Unite Forever Campaign. A retired managing partner of the Dallas Office of Ernst & Young LLP, McDonnough has been a leader in both philanthropy and healthcare throughout his career and epitomizes the spirit of volunteerism that is the inspiring legacy of J. Erik Jonsson.

“We are moving the needle in many of the critical areas,” he said about United Ways efforts.

Of the $61.6 million raised this year through the annual campaign, two-thirds, $41.1 million, will go to directly support United Way’s work in education, income, and health – the building blocks of opportunity.

The remaining funds, $20.5 million, will support non-profits specifically designated by donors. In addition to the annual resources, the Unite Forever endowment campaign has secured commitments totaling more than $10 million this year, reaching $61.7 million toward its $100 million goal.

“We are thrilled with the success of this year’s campaign, funding the important work United Way does to graduate prepared students, move people out of poverty and ensure access to quality healthcare,” said Jason Downing, United Way of Metropolitan board chair. “Rich and Mary Templeton’s unwavering focus and commitment have inspired incredibly impressive results, ensuring our community continues to thrive.”

Funds invested in United Way will drive social innovation and prepare students for success in high school and in life, equip people with the skills they need to get ahead and save for the future and ensure families in need have basic resources.

“Something special happens when people come together, united around a common goal,” Sampson said. “There’s an energy and more potent force generated than any of us could ever create alone. As we come to this campaign year’s end, we celebrate this power that can lift a community and put opportunity in the hands of all North Texans.”

Following the Templetons and an influential line of successful leaders committed to making a difference in our community, Tom and Karen Falk will serve as United Way’s 2019-20 Annual Campaign chairs.

The coming year will mark the 95th campaign for United Way of Metropolitan Dallas.

“Karen and I are honored to serve as the next chairs of United Way’s annual campaign,” Falk said. “We’ve seen firsthand how gifts to the United Way make a lasting difference for our community.”

The couple co-chaired United Way of Metropolitan Dallas’ 90th Anniversary Unite Forever Gala in 2015. They are longtime members of United Way’s Ruth Sharp Altshuler Tocqueville Society and have extended that legacy through support of the Unite Forever campaign.

“Rich and I are incredibly honored to have served as campaign chairs over the last year, as our entire community came together to impact so many people,” said Mary Templeton. “We know Tom and Karen will continue to unite North Texans from all walks of life and inspire them to join in the community-building work of United Way.”

To learn more about United Way of Metropolitan Dallas and how to give and get involved, visit unitedwaydallas.org.

Wrap It Up Luncheon