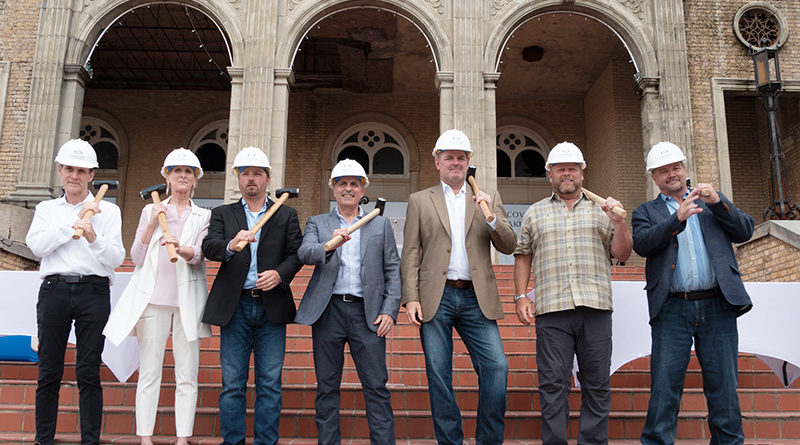 It’s been a long time since making a drive out to Mineral Wells for a relaxing weekend has been on the “to do” list. Today, the owners and developers of The Baker Hotel and Spa, including well-known Park Cities resident Brint Ryan, commenced a three-year, $65 million renovation and restoration of the iconic hotel located in Mineral Wells.

It will be the largest restoration in Texas history of a site listed on the National Register of Historic Places. The Baker will be transformed into a luxury resort hotel, spa and conference center designed for modern-day travelers and event-goers with plans for a grand opening in 2022.

Known as the “Grand Old Lady of Mineral Wells,” the 14-story property opened in 1929 as a health resort frequented by celebrities, including Clark Gable, Judy Garland, Marlene Dietrich, The Three Stooges and President Lyndon B. Johnson. Notorious couple Bonnie and Clyde also reportedly stayed in one of the hotel’s luxurious suites. At the time, the hotel was the first hospitality “skyscraper” in the U.S. built outside of a major metropolitan area.

In conjunction with the City of Mineral Wells, the owners and developers — which include Laird A. Fairchild of Hunter Chase Construction and Development, Chad Patton of Wells Fargo Advisors, G. Brint Ryan of Ryan LLC, Randy Nix of Nix Rental Homes, Jeffrey M. Trigger of La Corsha Hospitality Group, Mark Rawlings of Syndicated Contracting Services and Beth and Kurt Thiel of Thiel & Thiel — plan to restore the Spanish Colonial Revival hotel to its status as a premier wellness-focused resort via a public-private partnership.

“This is a great day for Mineral Wells,” said Fairchild. “The Baker Hotel and Spa will be the crown jewel in a much larger plan to re-establish Mineral Wells as a destination for the weekend traveler – much in the same way that Magnolia has spurred interest in Waco. The Baker will attract visitors from across Texas who are looking for a luxurious getaway as well as those from across the country and around the world who crave the small-town Texas experience. In addition, with plenty of hospitality space, we believe The Baker will be an enormously popular spot for weddings, corporate gatherings and other special events that will provide additional economic benefit to Mineral Wells.” The Baker originally opened to the public on November 9, 1929 – mere days after the stock market crash – at a cost of $1.2 million. Following the closure of Fort Wolters after World War II, the hotel’s business suffered and it eventually closed for good in 1972. The structure has sat abandoned since despite numerous renovation plans that never came to fruition.

This complete renovation will present a renewed collection of 157 guest rooms, a Baker Suite and Presidential suite, natural springs-based wellness spa with indoor and outdoor natural springs, more than 22,000-square-feet of meeting and event spaces, the restored and elegant 14th floor ballroom known as the “Cloud Room,” as well as a restaurant, lounge, coffee shop and retail options. The carefully crafted and curated design will position The Baker Hotel and Spa as a premier destination for weddings, retreats, corporate events, local gatherings, and weekend getaways.

Construction is slated to begin immediately, with a completion date in 2022. A production team will document the entire renovation efforts for television and filming will span the three-year construction period of the hotel, as well as the revitalization effect it will have on the city of Mineral Wells.

“The resurrection of The Baker would not be possible without the overwhelming support of the citizens of Mineral Wells,” said Patton. “From the start, they have been very vocal in their belief that this project would be a cornerstone in the redevelopment of downtown. The City government worked tirelessly with our team to put in place a public-private partnership that made sense for everyone. We also must thank Governor Abbott for designating this project and a majority of downtown Mineral Wells as an Opportunity Zone. That designation was the linchpin that helped pull all this together and make this long-term investment possible. This project is a substantial commitment that greatly enhances the renaissance of this wonderful city.”