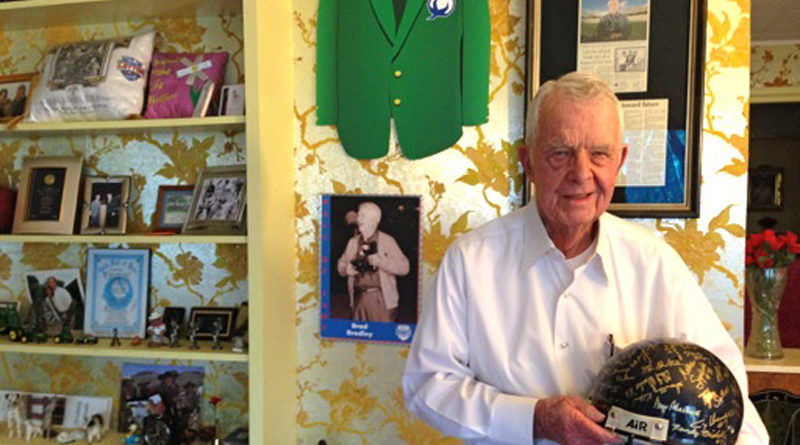 Brad Bradley, a highly awarded sports photographer and WWII veteran, has been selected University Park’s 2019 Citizen of the Year.

Bradley was overwhelmed when Mayor Olin Lane Jr. called him with the news, “It was a great joy to talk to the Mayor and I was so honored to have been selected,” he said. Bradley, who will celebrate his 97th birthday on July 23, has lived in University Park since 1947. He was born and raised on a farm between Arlington and Mansfield and attended Arlington High School. For college, he attended North Texas Agricultural College, which is now known as the University of Texas Arlington.

Before his photography career began, Bradley entered the service in 1943 and was in the Army Air Corps until the end of World War II. Following the war, he worked for the government auctioning off property in Arizona and then Texarkana.

In 1947, his father-in-law, Jim Laughead, began completing yearbook photography for SMU. With plans to open a studio, he asked Bradley and his wife, Betty, to move to University Park and help with the shop.

Laughead Photography was located on Hillcrest, in the space that is currently occupied by Jimmy John’s.

The studio opened many doors for Bradley.

Heisman Trophy winner Doak Walker was playing for SMU the first year he photographed their games. Bradley began taking photos for the Cotton Bowl in 1947. Today, he is the only sports photographer in the Cotton Bowl Hall of Fame. During his legendary career, Bradley has worked with over 40 sports teams throughout the country at the high school, college and professional levels. In the summer of 2018, the College Football Hall of Fame presented an exhibit dedicated to his photography.

Although Bradley doesn’t do as much photography as he once did, he still is active in the community. He enjoys serving on the University Park Public Facilities Naming Committee, and assisted by his son Jimmy, he continues to take photos for Highland Park High School, as well as SMU, the Cotton Bowl, and the Park Cities July 4th Parade.

Bradley also starts every morning with coffee at Kuby’s so he can visit with people. As a matter of fact, his favorite part about living in University Park is the people, “I enjoy being around young people and there are so many in this community,” Bradley mentioned. “I feel like I have made some really wonderful friends along the way.”

After riding in the July 4 Parade, Bradley will be presented with a plaque and a special Citizen of the Year gift during a brief ceremony at the gazebo in Goar Park.

The Citizen of the Year award was created by the City Council in 2005 to boost public awareness and appreciation for the many residents who work, often behind the scenes, to better the City’s quality of life.

UP Names ‘Citizen of The Year’

Byron Egan Named UP Citizen of the Year

UP Looks For ‘Citizen of The Year’