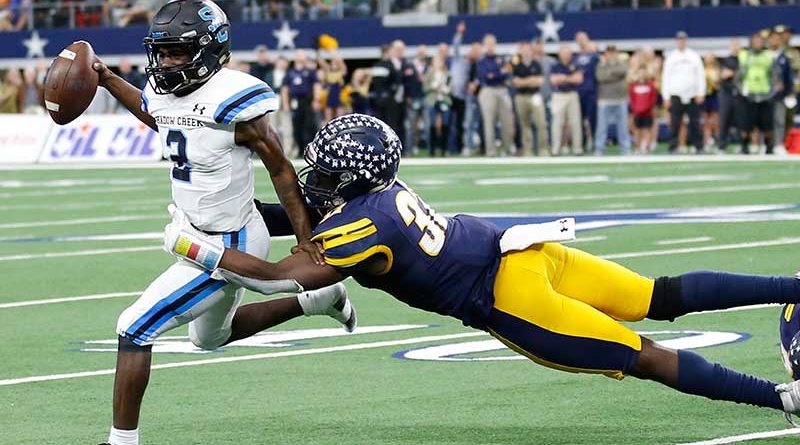 In almost four decades as one of the state’s most successful football coaches, Randy Allen never had a player recruited by the University of Texas — until Prince Dorbah came along.

That speaks volumes for where Dorbah ranks among the greatest defensive players in Highland Park history. The elite defensive end, who already has two Class 5A Division I state championships with the Scots, has verbally committed to play for the Longhorns beginning in 2020.

For Dorbah, the journey to Austin has been much longer than a three-hour drive down Interstate 35. It started 18 years ago in Cote d’Ivoire, a western African nation torn apart by civil war.

“I still don’t know where I would have been if it wasn’t for my brother and the family that took me in,” Dorbah said.

His older brother, Junior, didn’t play much in two seasons for HP, but his role as a mentor for Prince off the field has been vital.

“Every good story starts with a struggle and winds up with somebody shining at the end.” –Prince Dorbah

They were sent to the United States when Prince was 3. They settled with an aunt forced to care for five boys in a cramped three-bedroom apartment in Vickery Meadow, where they primarily spoke their native French. Their mother died of illness not long after the siblings fled, and their father later disappeared.

One of Prince’s cousins had friends in the Park Cities. Prince started tagging along and wound up befriending Tyler Kilgus, who was a year older. He spent one night at the Kilgus house, then a weekend, and then almost every weekend.

“I felt like I belonged there,” Prince said. “They treated me like their own son when they took me in.”

By seventh grade, Alphie and Kari Kilgus had arranged to become Prince’s guardians. He enrolled at Highland Park Middle School, which was a difficult transition at first.

“I sat in the class, and there was a whole bunch of kids I had never seen before,” he said. “But as the years went by, I made a lot of friends.”

Prince has always been tall and athletic, so he gravitated to basketball. He joined a select team and dreamed of one day landing a college scholarship on the hardwood.

“Basketball had always been my passion,” Prince said. “I didn’t see the potential in me playing football.”

HP football coaches and players thought otherwise, which is why they dragged him out of bed as a freshman and into the weight room for conditioning sessions.

By the following year, he was a starter on the varsity team. He was still lanky and raw but recorded 10 sacks as a sophomore. He picked up his first NCAA Division I scholarship offer from Oklahoma State.

As a junior, Prince emerged as one of the top defensive linemen in the Dallas area. He recorded 81 tackles and 21 sacks and earned defensive MVP honors in HP’s victory over Alvin Shadow Creek in the state championship game. Tyler Kilgus was the starting center for the Scots in that game.

“He’s played against some of the best competition, and he’s bigger, faster, and stronger now than he has been,” Allen said.

Prince has shown progress elsewhere, too. His early academic struggles at HPMS puzzled teachers and family members until he learned the diagnosis — dyslexia.

“I always got distracted and sidetracked easily,” Prince said. “I was making it hard on myself. I just paid attention and had some caring teachers.”

These days, his grades are better than ever. Another vote of confidence came when Prince was named one of six HP captains by his teammates during the offseason. He’s become one of the first to arrive for workouts, has a better attitude and work ethic, and is a more vocal leader who sets an example for younger players.

“There’s a lot of people around me rooting for me,” said Prince, who now has 226 pounds on his 6-foot-4 frame.

When he moved in with the Kilguses, Prince was still an Ivorian refugee with a green card. But when the family formally adopted him two years ago, he became an American citizen. Now he hopes his saga can inspire others.

“I don’t know how or why I’m here, but I’m so thankful,” Prince said. “Every good story starts with a struggle and winds up with somebody shining at the end.”

Scots, Wildcats to Battle for 10-6A Lead 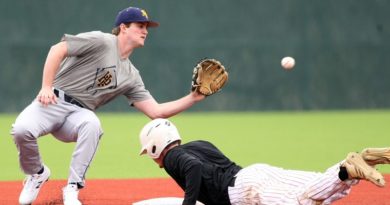 Scots Roll Past Kimball in Area Round