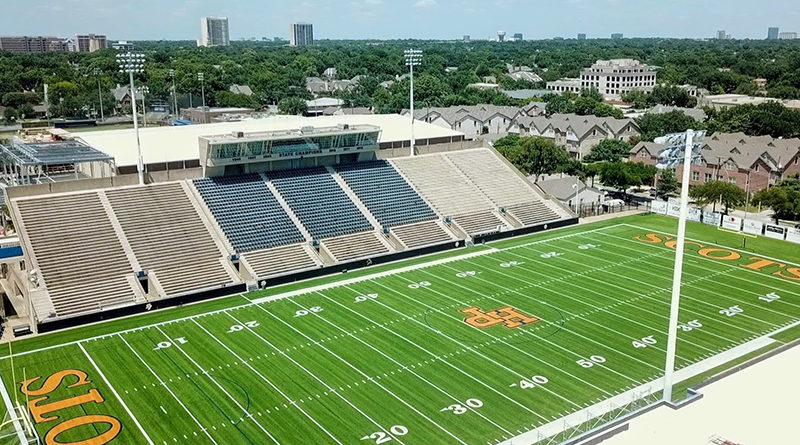 Highland Park athletes will be running, tackling, and scoring on a new surface this season.

Shaw Sports Turf and Highland Park ISD have again partnered to bring new turf to the high school, and this time, it’s at Highlander Stadium.

The stadium has undergone renovations and upgrades as part of the $361.4 million bond package passed in 2015. With that comes a brand new turf playing-surface that is ready for use in football, soccer, lacrosse, and more.

The turf resembles grass, minus the cleanup coming with dirt and sod. Expect the field to be “faster” as it’s broken in throughout this school year, said HPISD athletic director Johnny Ringo. Shaw Sports Turf also installed a new baseball field at Scotland Yard last spring.

“We know the people at Shaw and obviously have a great relationship with them from their work on our baseball field,” Ringo said. “The lifespan of turf [on a football field] is usually about eight years, and we were coming up on our seventh season with the old one, so we figured it was as good a time as any to make a change.”

Shaw has placed its synthetic turf fields on other football fields throughout the country, but as Ringo noted, Highlander Stadium will be the first in Texas.

The HP football team, which has won three consecutive Class 5A Division I state titles, has been practicing at the stadium and will play its first game on the turf on Sept. 13. The girls soccer squad, which also is a defending state champion, will start its season in January.

“It certainly looks fantastic,” Ringo said. “I think the kids are really going to enjoy playing on it.”