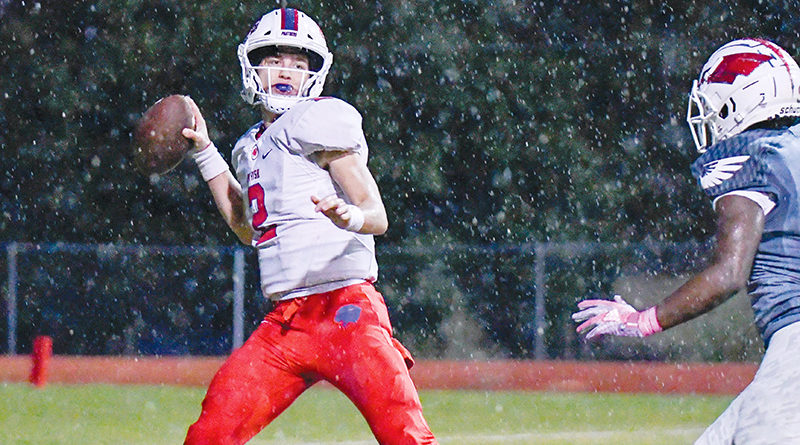 Even as the spotlight shines brightly on Preston Stone, he always likes to share credit with his brothers.

There are his two older siblings. They showed no mercy when Stone was a kindergartener running drills with them in their yard and have been role models ever since.

And there are his teammate “brothers” who block for his runs, catch his throws, and help Stone’s impressive statistics translate into victories.

Even as major college programs from around the country descend on Parish Episcopal’s blue turf for practices and games to watch the junior quarterback’s every move, Stone tries to remain grounded.

“Every time you go out on the field, the most important people are the guys around you,” he said. “I’ve gotten all the attention I could ever want. They work just as hard as I do.”

Stone showcased his dual-threat abilities as a sophomore last season, passing for more than 3,500 yards and 44 touchdowns with just six interceptions. He also ran for nine scores as the Panthers reached the TAPPS Division I state semifinals.

“Every time you go out on the field, the most important people are the guys around you.” -Preston Stone He earned his first scholarship offer from a Division I school as an eighth-grader at Highland Park Middle School. That offer from the University of Nevada still stands, although several dozen other suitors have joined the fray, including traditional powerhouses such as Alabama, Georgia, Michigan, Notre Dame, Ohio State, USC, and Texas.

“My freshman year it really started to hit me,” said Stone, who won’t be able to sign with any school until November 2020. “Things were kind of hectic. I didn’t know how to deal with it.”

He’s since become more comfortable with being a national recruit in the social-media age, in part through support from his family and his Parish teammates. Older brother Lindell is a quarterback at the University of Virginia. Middle brother Parker was a receiver at Parish last season and will stick around as a volunteer coach.

Although the family lives in University Park, Lindell attended Woodberry Forest, a rural boarding school in Virginia. Preston had the option of going there, too, but preferred to stay closer to home. Parker played at Woodberry Forest for two years before transferring to Parish to compete alongside Preston.

“I didn’t really fall in love with it like they did,” Preston said. “For some reason, I felt like Dallas was the place for me.”

Parish head coach Daniel Novakov has gained a reputation for developing quarterbacks and said Stone has consistently shown poise and maturity beyond his years. He cited Stone’s leadership during the team’s postseason run a year ago, along with his lack of arrogance.

“He gets better every day. It’s like having another coach on the field at this point,” Novakov said. “He’s just a normal kid who happens to have a unique talent.”

“In his college days, he was a rock star. He was a dog every Saturday,” Stone said. “Competition has always been a huge thing for me. That’s always been a part of me.”

As the limelight intensifies leading up to his college decision, Stone remains focused on the classroom, where he’s an honor-roll student, and on the field.

“He’s handled it better than anybody could have expected,” Novakov said. “There’s not a lot of kids who could receive all that notoriety and take it in stride. He’s got his priorities straight.”

Cockatiel on The Lam in Williams Park