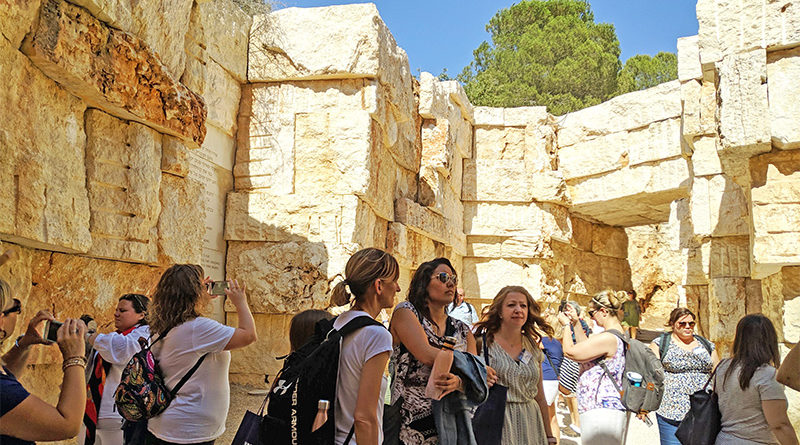 The next time Madeline Elliott teaches her Christ the King Catholic School social studies students about the Holocaust, the affecting words of Gita Cycowicz could come to mind.

“Why did the Germans never see in me a human being? I had eyes. I had feelings. I had dreams,” the Auschwitz concentration camp survivor told Elliot and other educators.

Elliott was among 34 chosen to attend the Echoes & Reflections seminar in Jerusalem in July.

Learning about the Holocaust in Israel and forming personal connections with experienced and respected historians and scholars empowered her to teach with more authenticity, she said.

The seminar offered ways to teach without traumatizing her students by “counterbalancing the light with the dark” while providing factually correct information. Her lessons will cover pre-war Jewish life, Holocaust art and poetry, and accounts of those who risked their lives to save Jews and participate in resistance movements.

“I think it is important that our kids know the whole world didn’t fail,” Elliott said.

Echoes & Reflections was founded to expand and improve Holocaust education in U.S. classrooms. It has involved more than 60,000 educators and reached an estimated 6 million students since 2005, said Lindsay Friedman, managing director for the seminar.

“The students I work with are young. They can’t drive yet. They can’t vote yet. So how can we help them fight injustice?” -Madeline Elliott

“Today’s challenging climate and loss of Holocaust survivors only reinforces the vital need for students to learn the history and critically consider the lessons of the Holocaust and other genocides,” Friedman said. “We believe that effective Holocaust education teaches students to examine their roles and responsibilities to combat antisemitism, racism, and hatred.”

Elliott found Yad Vashem, the World Holocaust Remembrance, moving. A movie started with the beauty of pre-war Jewish life. But the people in the film slowly disappeared, and an observer assimilated artifacts, stories, and images of the horrific time.

In the end, the doors opened to the outside and the beautiful view of Jerusalem,” Elliott said. “The Holocaust wasn’t the end of the story.”

She met other survivors. Genia and Nahum Manor fell in love working in the factory of Oskar Schindler. That one man saved 1,200 Jews from persecution, and those 1,200 gave breath to even more lives through their children and grandchildren, they told her.

Rena Quint, the only member of her family to survive, spoke of the “patchwork of mothers” who cared for her and of how as survivors die off, it will be up to others to pass on their stories.

“She looked right at us and said, ‘It will be up to you to be our ambassadors,’” Elliott said.

Elliott said she feels a moral duty to teach about the past and encourage students to use what they learn to process contemporary issues and become agents of change.

“The students I work with are young,” she said. “They can’t drive yet. They can’t vote yet. So how can we help them fight injustice?”

• Anti-defamation League (ADL), which provides training, resources, teaching tools, and strategies for educators and students on the topics of bias, diversity, and social justice.

• University of Southern California Shoah Foundation, which uses audio-visual interviews with survivors and witnesses of the Holocaust and other genocides to provide compelling voices for education and action.

Christ the King Has New Principal