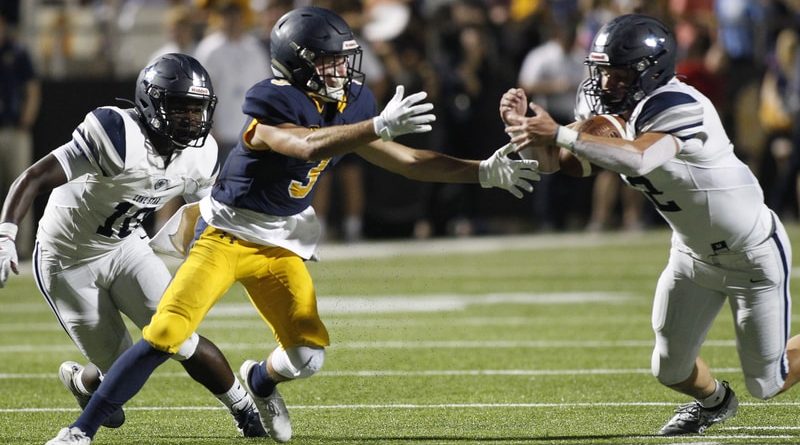 Highland Park has fought back from behind numerous times to win home games during the past 21 years, but on Friday, the hole was simply too big.

It also marked the Scots’ first home defeat against an in-state opponent since Denison beat HP in 1998 — the year before Randy Allen took over on the sidelines. That’s a span of 103 games.

Now the Scots must regroup prior to next week’s District 6-5A Div. I opener against Bryan Adams.

Lone Star was superior in all three phases of the game. The offense scored 17 straight points in the first quarter. The defense shut out HP in the first half and forced four turnovers. And the Rangers made three field goals while excelling on returns.

“Lone Star is very talented and they were hot,” said HP head coach Randy Allen. “I don’t think they dropped a pass in the first half and they didn’t turn the ball over. It’s hard to beat a good football team like that if you don’t match that execution.”

The Scots (2-1) staged a mild rally in the second half but never found a consistent rhythm. They simply couldn’t cut the deficit below double digits.

“We played really well. No matter what happened, we continued to battle,” said Lone Star head coach Jeff Rayburn. “Our guys can handle anything. When you play a great opponent at their home stadium, there’s going to be some adversity. They kept coming at us. We had to finish it off.”

The Rangers (3-0) took control from the outset, thanks in large part to dynamic playmaker Marvin Mims. The Stanford commit returned the opening kickoff 54 yards, then caught a 45-yard touchdown pass from Garret Rangel on the first offensive snap.

On the next possession, Mims moved the chains with a reception on fourth-and-18, leading to a short touchdown run by Jake Bogdon. That came after a long punt return.

Lone Star went ahead 17-0 before the Scots had gained a first down. Once HP started moving the ball, however, it struggled to capitalize on scoring opportunities.

The Scots made a big defensive play in the second quarter when they squelched a 13-play Lone Star drive with a goal-line stand. But three snaps later, an interception by Sherman Steptoe gave the Rangers the ball back with favorable field position.

Rangel found Mims on a 38-yard scoring strike on the very next play, extending the Lone Star advantage to 24-0. Mims caught eight passes for 157 yards and two touchdowns before halftime.

“We had to dig ourselves out of a hole,” Allen said. “We just never could close the gap to make it an interesting finish.”

The aggressive Lone Star defense had Morris scrambling for much of the night. HP’s opening drive of the third quarter included a sack followed by another interception, this time by Tyron Hall.

The Scots got on the board later in the third quarter on a 26-yard pass from Morris to Paxton Anderson.

They survived a fourth takeaway by the Lone Star defense, then cut the deficit to 27-13 by capping an impressive 13-play possession with a 1-yard touchdown plunge by Morris.

The Scots scored again on a 1-yard run by Doak Walker with 4:53 remaining, but didn’t have enough time to complete the comeback. Yet the Lone Star defense, which didn’t allow a touchdown in its first 10 quarters this season, managed to stifle an HP attack that tallied 118 points in the past two weeks.

“They’ve got good pass rushers and good pass defenders, and they’ve got linebackers who don’t miss tackles,” Allen said. “They got pressure on us and didn’t give us anything easy.”

Morris completed 26 of 45 passes for 318 yards — with 244 coming in the second half. He moved past 1,000 yards passing in just three games with seven touchdowns, but he also has eight interceptions. Ben Smith caught eight throws for a team-high 94 yards, while Anderson added five grabs for 76 yards.

Mims was dazzling with 10 receptions for 219 yards. Bogdon added 117 rushing yards on 21 carries. Rangel, a sophomore, finished 16-of-33 for 253 yards but completed just two of 11 passes after halftime.

“We’ve played three good teams. You play good teams to find out what you need to work on,” Allen said. “We found out some things. They were more ready to play than we were. We can’t take anything for granted and we can’t be complacent. There’s going to be nights when the other team is hot. You’ve got to be able to meet their intensity and somehow turn it around.” 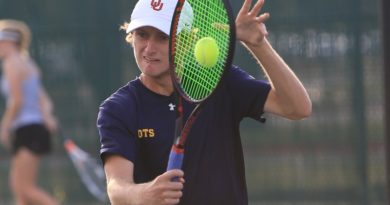