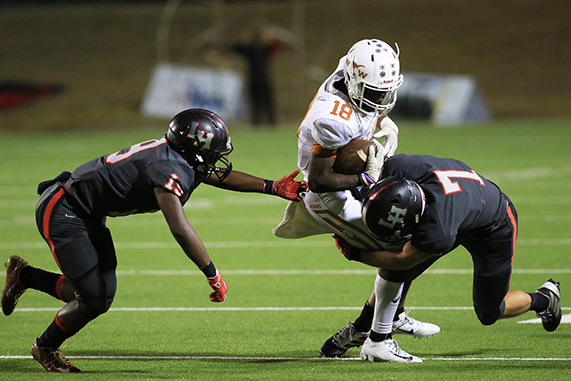 After a promising start to a potential bounce-back season, more rigorous District 8-6A competition has slowed the momentum for W.T. White.

The Longhorns were shut out for the second straight week in a 49-0 loss at Lake Highlands on Friday. And they will host state power Duncanville and its vaunted defense on Thursday.

WTW’s most lopsided defeat of the season came with just 86 total yards on offense, and an inability to slow down the Lake Highlands rushing game.

Tyson Washington ran for 226 yards and a pair of touchdowns for the Wildcats (4-3, 2-2), while Zhmari Edwards and Dreveon Eatmond added two more touchdowns apiece.

The Longhorns (3-4, 1-3) had a pass intercepted on the first offensive snap. Two plays later, Washington plunged into the end zone, and the Wildcats never looked back, wearing down the WTW defense with four straight scores.

The only sustained drive for WTW came in late in the first quarter, but the 13-play possession stalled at the Lake Highlands 38-yard line.

The Longhorns, who completed just eight of 24 passes and averaged just 1.4 rushing yards per carry, have lost four of their past five games following a 2-0 start to the season.