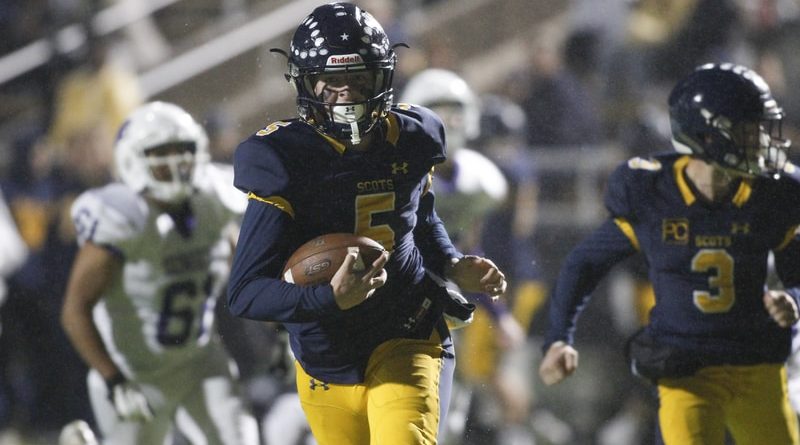 The outcome was inevitable given the talent disparity in a game that was an unfortunate byproduct of the current UIL alignment cycle.

Highland Park’s 79-0 thrashing of Sunset on Friday at Highlander Stadium is what happens when a three-time defending state champion plays a downtrodden program that has lost 16 consecutive games, including 11 shutouts.

As they await a showdown with Lancaster next week that will likely carry District 6-5A Div. I title implications, the Scots (7-1, 5-0) were able to pad their statistics against the overmatched Bison (0-8, 0-5).

HP scored almost at will, amassing 44 points in the first quarter and 72 in the first half. The Scots tallied nine touchdowns on their first 12 offensive snaps. And it could have been much worse.

The biggest highlight was a 99-yard scamper by Hunter Heath after a Sunset punt pinned the Scots at their own 1-yard line. That was the longest play in school history.

Heath finished with 125 yards on just four carries, with three touchdowns. Brooks Bond also scored on both of his rushing attempts.

Through the air, Chandler Morris was a perfect 4-for-4 for 206 yards and four touchdowns. Each went to a different receiver — Drew Scott, Crockett Corwin, Case Savage, and Will Pettijohn.

On defense, the Scots surrendered only 39 total yards, recording numerous sacks and tackles behind the line of scrimmage to preserve their third shutout of the season. They also were credited with a safety on an errant snap by Sunset.

At any rate, HP’s fifth consecutive lopsided victory was also the 399th career win for longtime head coach Randy Allen, who will aim to become just the third Texas coach in history to reach the 400 milestone next week.