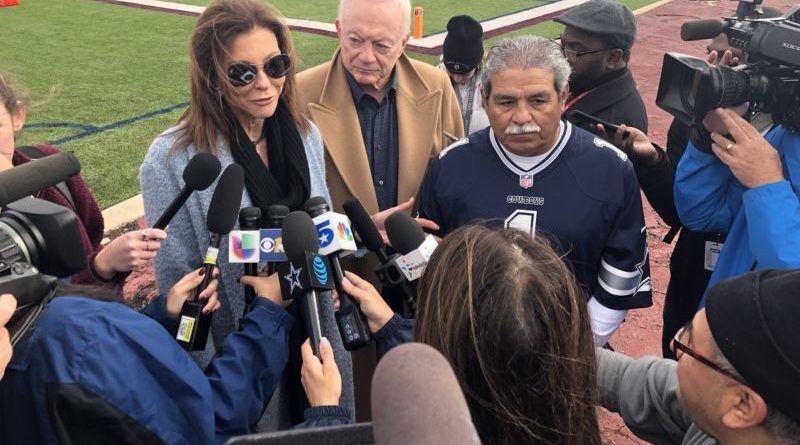 “Walk off here feeling wonderful about yourselves,” Dallas Cowboys owner Jerry Jones told Thomas Jefferson football players as he wrapped up his pep talk shortly before they took to Loos Field for their homecoming game Saturday. “Let’s do it fellas — Patriots, 1,2, 3!”

“Patriots!” the team yelled as they broke from the huddle.

In a week filled with extreme ups and extreme downs, the Thomas Jefferson squad was finally in a place that felt normal, if only for a few hours while they played Spruce High School — thanks in part to donations earlier in the week of shoes and gloves from SMU, and the work of W.T. White students and parents who not only hosted, but transformed their gym into a venue for Thomas Jefferson’s homecoming dance Saturday night.

And they knew the Jones family and the Cowboy’s organization would be at the game, and that a big announcement was coming — but it was likely safe to say that nobody knew how big the announcement would be.

Jones and his daughter and Dallas Cowboys’ Executive Vice President and Chief Brand Officer, Charlotte Jones Anderson, took to the field, where first Thomas Jefferson head coach Kendall Hill was named the Dallas Cowboys Whataburger Coach of the Week. Hill received a $2,000 grant for the football program, sponsored by Whataburger and The Gene and Jerry Jones Family Foundation.

But when the big presentation check was turned to face the crowd in the stands, and Jerry Jones announced that the Cowboys organization and the NFL Foundation would be committing $1 million to help rebuild the school’s football field and program, the biggest cheers of all erupted.

“Our family, the Dallas Cowboys and the NFL Foundation are proud to be a part of this announcement today,” Charlotte Jones Anderson, who is also chair of the NFL Foundation, said in a statement later. “We are saddened by the devastation that these storms brought upon our community, and we and eager and determined to help get the rebuilding process started. We reached this decision after consulting with the DISD leadership and hearing their input as to how we could help in an area of need that wouldn’t necessarily be covered by government funding.”

“We appreciate and fully support the Dallas Cowboys help in rebuilding the athletic and football field at Thomas Jefferson High School, a place where so many of the high school students gather to practice their sport, band, drill team and cheerleading,” Hinojosa said in a press release from the Cowboys. “Often the importance of what athletics brings to the student body can be overlooked in instances like what we are facing. It’s nice to know that we have a community partner in the Cowboys that is stepping in to help here.”

But the help doesn’t end at a monetary donation. The Cowboys announced they have also engaged Hellas Construction, who is the official turf provider for the team, to partner with the district on the rebuilding project.

“Athletics play such a key role in the growth and development of our youth, but the funding for quality programs and facilities is often overlooked or underdeveloped—especially in times of hardship,” said Jones Anderson. “This gift will help the students and athletes of Thomas Jefferson to be able to continue to grow, compete and enjoy the benefits of sports, and related school activities, for generations to come.”

And while Spruce beat the Patriots 48-7, the school (and the district) no doubt felt further buoyed by a second big announcement.

Unbelievable. @mcuban just announced he is donating a total of $1.1 million to the Dallas Education Foundation to support our school communities impacted by Sunday’s storms. #DallasISDStrong #DallasEdFoundation @mphav pic.twitter.com/TABYbjkZze

Foundation executive director Mita Havlek said that as of Saturday, the foundation has $1.37 million pledged for the fund.

“This includes Mark Cuban’s $1.1 million, of course,” she explained, adding that in-kind donations like supplies and technology needs have also been donated, but she didn’t have a value on those items just yet.

Those interested in contributing to the foundation’s fund can do so at DallasISDTornadoReliefFund. For more information, call  972-925-3053.

We assembled a collection of the sights and sounds from Saturday’s announcement below.

“This is life changing for the TJ Community.” -Thomas Jefferson High School Principal Massey on what today’s homecoming game and $1 million donation means to the school.@dallasathletics #DallasISDStrong pic.twitter.com/o1SqFEr1ak

Gottsacker Will Be Preferred Walk-On at Texas