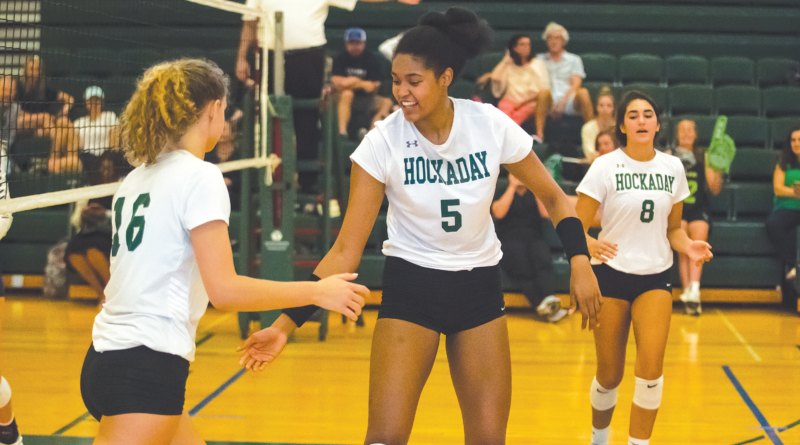 Leilah Smith stands out every time she’s on the volleyball court, and not just because of her 6-foot-5 frame.

The Hockaday senior is the most decorated player in school history and one of the most feared middle blockers in the country. Later this fall, she’ll sign to play in college at Stanford, which won a national championship last year.

You’d never know that Smith got a late start in the sport nor how humility and hard work have played a role in her development — even for a tall girl with a vertical reach of almost 11 feet who was athletic enough to dunk a basketball as a freshman.

“We knew Leilah was going to be special when she came in. She’s been a real ambassador for the program,” said Hockaday head coach Michael Gass. “And she still has fun while she plays.”

Volleyball was the third choice growing up for Smith, who played basketball for four years before switching to track and field as a high jumper and race-walker. Unhappy with both, she took her first volleyball lesson at age 12.

“I was not good at all,” Smith said. “It was kind of intimidating at first. I had to learn everything from scratch. I put a lot of effort into it.”

“We knew Leilah was going to be special when she came in. She’s been a real ambassador for the program.” -Coach Michael Gass

Her athletic family didn’t have much of a volleyball background, other than a cousin who was a setter in college. Her father played basketball, and so does her younger brother, Colin, a 6-foot-7 sophomore at St. Mark’s. They were supportive as Smith got stronger and developed her skills, eventually becoming a juggernaut at the net.

Stanford began recruiting Smith three years ago. Smith applied and was accepted last spring, and then verbally committed to the Cardinal in May.

“If you would have told me I would go to Stanford, I never would have believed you,” said Smith, who lives in DeSoto and likes to play the piano in her spare time. “I wanted a really high academic school. I’m really fortunate.”

During the past year, Smith has focused on trying to become a complete player, adding skills such as serving, setting, and digging to her arsenal. The goal is to help Hockaday win its first title in a decade at the SPC fall championships on Nov. 7-9 in Houston.

That feat would be extra special for Smith and four senior teammates — Halle Blend, Erica Hulsey, Maddie Hum, and Mia Weathersby — who have played together on Hockaday’s varsity squad for the past four years.

“I could see they were going to help build the program to what we wanted it to become,” Gass said. “This class had the skill set to do that.”