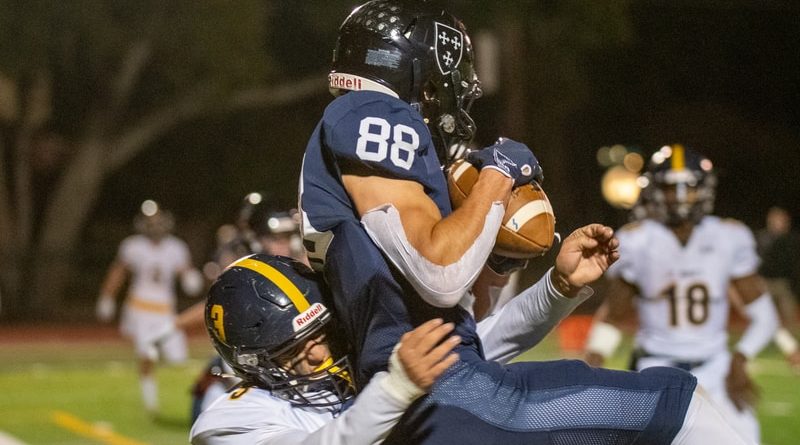 ESD and St. Mark’s didn’t seem to care that their season-ending clash carried no postseason ramifications. Instead, the longtime SPC rivals battled as if it meant everything.

After trailing for much of the game, the Eagles prevailed 31-24 after Preston Morway’s 12-yard touchdown pass to Austin Russell in the second overtime at Jones Family Stadium.

ESD rallied to force overtime when Morway connected with a leaping Brodie Burke on a 7-yard scoring pass with 3.2 seconds remaining in the fourth quarter, then found Austin Russell for the two-point conversion.

The Eagles (6-2) finished strong after a heartbreaking double-overtime loss to Houston St. John’s the prior week, which essentially eliminated them from a spot in the SPC 4A championship game.

ESD also earned its sixth consecutive win over St. Mark’s, triumphing in the type of low-scoring nailbiter that resembled so many others in the series.

In the first overtime, the Lions (3-5) regained the lead with a 3-yard Kasen Roberson touchdown run before the Eagles answered with a 5-yard aerial hookup between Morway and Burke.

Prior to the late ESD heroics, St. Mark’s built a 17-9 lead thanks to a 54-yard touchdown pass to Conor Duffy from Anthony Andrews late in the third quarter, and a 1-yard scoring plunge by Andrews early in the fourth.

Morway was 32-of-56 passing for 243 yards and three touchdowns, and he also ran for 44 yards and a score. He surpassed the 2,500-yard plateau for passing yards in just eight games this season, to go with 32 touchdowns.

Burke finished with nine catches for 94 yards and two touchdowns, including another big grab on the frantic final drive to set up the game-winner. Russell also had nine receptions, while River Woods and Smith Cochran combined for 11 more.

In his final game for the Lions, Andrews tallied 280 passing yards in addition to playing a role in two touchdowns. He also intercepted a pass on defense. Duffy caught five throws for a game-high 96 yards. Paxton Scott and Connor Gaffney also shined in the passing game.

Exercise for Sinners and Saints in Snider Plaza

House of the Month: 4352 Normandy Avenue, UP