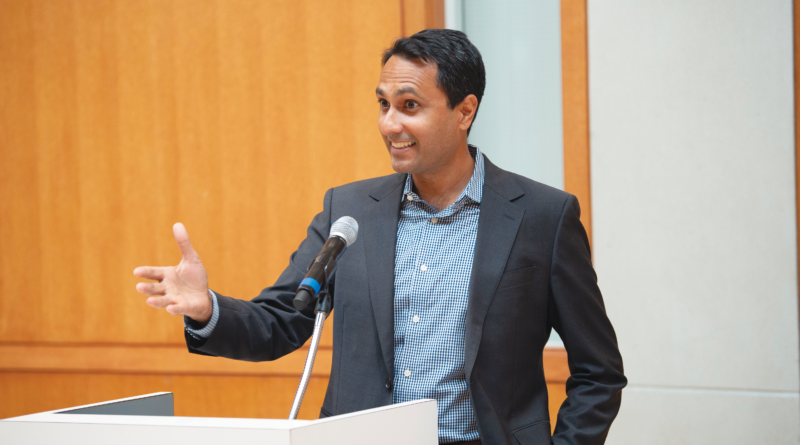 The faces of religious fanaticism are young; the faces of interfaith cooperation are old. That’s what Eboo Patel realized in college.

Today, he is an advocate for such cooperation, but he recalls criticizing what he heard during interfaith discussions until someone had the gumption to challenge him.

Patel decided to change, to stop criticizing, to build something better. He adopted the mindset that change occurs internally before it can happen in the world.

To foster this idea in its student population, SMU has developed a cultural intelligence initiative called [email protected] to promote frank discussions of religion, politics and race. [email protected] recently hosted a series of lectures by people that organizers felt embodied those ideals. Patel was one of the speakers.

Maria Dixon Hall, as SMU’s senior advisor to the provost for cultural intelligence, is responsible for the development and implementation of the program.

“To be successful in multicultural work, you have to be comfortable with deep disagreement.” -Eboo Patel

For about a year, SMU officials have traveled the country to find some of the best ideas so the campus can become one of the national leaders in cultural intelligence and its use.

“In order to be a world-changer, you have to be able to talk to the world,” Hall said.

Cultural intelligence is about giving people the skills, the behavior, and the knowledge to be able to communicate with anyone, anywhere, she explained.

“We are looking to build more authentic, more genuine, and more productive relationships between our faculty, staff, and students,” Hall said.

Patel encompassed the qualities she required. He received his doctorate in the sociology of religion from Oxford University, was part of President Obama’s Inaugural Faith Council, and contributed to the Washington Post, National Public Radio, and CNN.

Patel works with colleges and universities through an organization he created, Interfaith Youth Core (IFYC).

Religion should be a bridge to cooperation rather than division, he said.

Because enlightenment happened for him in school, he concluded that there was no better place to foster the interfaith initiative than college campuses. The title of his lecture: The Bridge of Faith and Religion: The Necessity of Viewpoint Diversity in American Higher Education.

“Diversity is not unicorns and rainbows like we teach in elementary,” he said.

Patel prefers to view interfaith work as a potluck supper – a celebration of pluralism. If every dish were the same, it would be boring.

“To be successful in multicultural work, you have to be comfortable with deep disagreement,” he said.

“Jane Addams not only criticized what was wrong,” he said. “She saw changes were needed and she built it.”