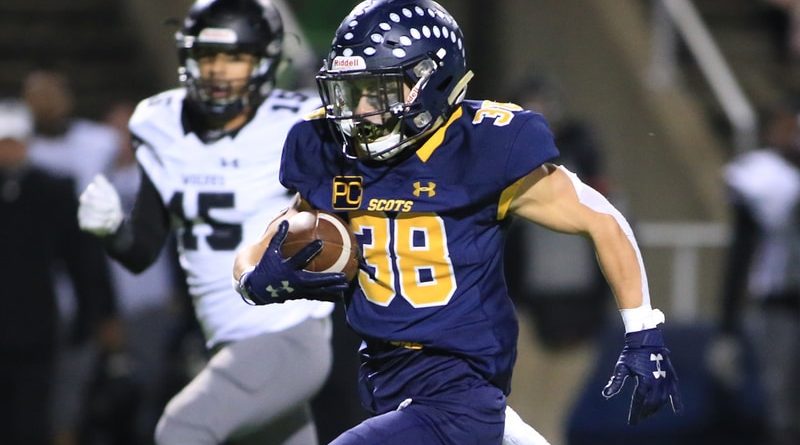 Hunter Heath was not going to let Highland Park be denied in its bid for a fifth consecutive district championship.

The speedy running back amassed 336 yards of total offense and scored four touchdowns as the Scots pulled away for a 43-21 victory over Mansfield Timberview on Friday at Highlander Stadium.

In the process, HP earned the outright District 6-5A Div. I title, and will host a Region II bi-district playoff game against Frisco Wakeland on Nov. 15.

“This is the kind of game we needed,” said HP head coach Randy Allen. “We’re still not playing our best football, but we’re getting better each week. They work so hard in practice, and that translates into better execution on the field. It’s time for us to really start hitting our stride.”

The Scots (9-1, 7-0) earned their seventh consecutive win by scoring 22 unanswered points in the second half, when the HP defense allowed only 49 total yards.

That same defense stifled the powerful Timberview rushing attack and allowed just one offensive touchdown. Among the numerous stops in the backfield was a key third-down sack by Prince Dorbah in the second quarter.

“Our defense played great all night,” said Allen, who claimed the 401st win of his coaching career. “They played tremendous against a great backfield. It’s hard to tackle those backs. You can’t ever relax.”

After scoring on a 75-yard scamper on the first snap of the game — the second straight game in which the Scots have reached the end zone on their first play — Heath finished with 19 carries for 240 yards. He also tallied three receptions for 96 yards.

For the season, the diminutive tailback has rushed for 852 yards in limited action. He missed a handful of games due to injury, and sat out during the entire second half of a few lopsided wins.

“He’s got lots of speed, and once he breaks into the open, he can take it all the way,” Allen said. “He’s better now than I thought he could be. He’s been coming on lately.”

However, Heath wasn’t the only standout. Morris completed 13 of 20 throws for 307 yards and three touchdowns, while Drew Scott caught four passes for 144 yards and a score.

The Scots dominated statistically with 559 yards of total offense. Yet the Wolves (6-4, 5-2) kept the game tight thanks to big plays on defense and special teams.

HP committed three turnovers, the biggest of which came on a first-quarter interception that Timberview’s Adam Cash returned 76 yards for a touchdown, tying the game at 7-7.

Early in the third quarter, Stacy Sneed intercepted a pass at the goal line on a fourth-down play, but the Wolves failed to capitalize. Ditto for an earlier fumble recovery.

Eventually, HP found its rhythm on offense, with a drive that covered 83 yards in just three plays. Morris and Scott hooked up for a 56-yard completion, setting up a 24-yard scoring run by Heath.

That gave the Scots a 14-7 advantage, which lasted only a few seconds. Timberview’s Montaye Dawson took the first play of the ensuing possession 59 yards to the end zone.

HP scored again just before halftime while taking advantage of favorable field position. Heath’s third touchdown came on a 6-yard catch to give the Scots a 21-14 lead at the break.

Dawson tied the game again by returning the second-half kickoff to paydirt, although the Wolves never scored after that.

HP put the game away with touchdowns on each of its next three drives. The first two were quick strikes, culminating in a 41-yard pass from Morris to Scott, and then on an 80-yarder from Morris to Heath.

An interception by HP’s Marshall Landwehr in the closing seconds of the third quarter set up the final tally on a 1-yard touchdown plunge by Morris.

Timberview kept this matchup closer than either of the two meetings last year, which the Wolves lost by a combined margin of 94-14. But they couldn’t generate much momentum against the aggressive HP defense.

“We squandered some opportunities,” said Timberview head coach James Brown. “I feel good about where we are defensively, but we’ve got to be able to throw the ball better. Consistently we just couldn’t get anything rolling.”

With the 53rd district title in program history, HP will make its 32nd consecutive postseason appearance. The Scots will be the top seed in postseason play, followed by Lancaster, Timberview, and Mansfield Legacy.