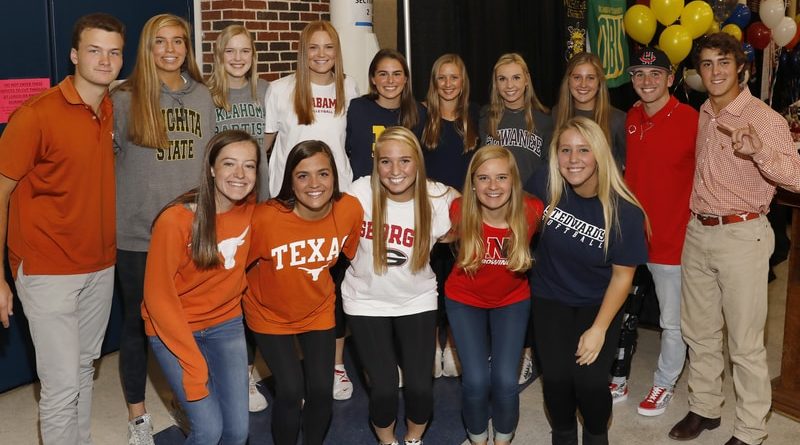 Kendyl Reaugh and her Highland Park volleyball teammates are focused squarely on the present, with a chance to qualify for the Class 5A state tournament coming up this weekend.

But on Wednesday, three seniors for the Lady Scots took a moment to solidify their future, signing scholarships to play college volleyball starting in 2020.

Reaugh signed with Alabama, while teammate Lauren McMahon will head to Wichita State and Avery Hellmuth will play for Oklahoma Baptist.

Reaugh became enamored with Alabama when she first visited the Tuscaloosa campus in September 2017. One coaching change later, she’s eager to join a program on the upswing in the Southeastern Conference.

“Right when I got on campus, I knew it was home,” Reaugh said. “They have a really good family aspect and really want their athletes to succeed.”

McMahon committed to the Shockers about a year ago, after a busy summer of attending camps and taking visits around the country.

“Wichita was where I felt at home,” she said. “I wanted to experience a different state and how it would be away from home.”

Hellmuth will join a successful program at Oklahoma Baptist, which transitioned from the NAIA ranks to NCAA Division II just four years ago.

“I’m really excited to get in that environment,” Hellmuth said. “I was looking for a smaller school. I think it’s a great fit for me.”

Echols, who was the top scorer on HP’s state championship team last season, has been committed to play soccer at Texas since the end of her freshman year.

“I’ve been looking forward to this for a while,” she said. “It’s the right place for me. Since I committed, it’s grown to be better and better every day.”

O’Neal said Georgia was the only school she visited that provided the right balance between athletics, academics, and social life.

“They all perfectly fit,” said O’Neal, who committed to the Bulldogs in October 2018. “I fell in love with the program and the school — everything about it.”

Roden has been tied to the golf program at Texas since he was little. He grew up next to former HP and UT standout Cody Gribble, now on the PGA Tour, and committed to the Longhorns when he was only in eighth grade.

“There’s been a lot of Texas influences around me from a young age,” said Roden, who won an individual state title as a freshman and has been part of three team championships with the Scots. “It’s great to be a part of something with such longstanding tradition.”

Fojtasek, who transferred to HP this year from St. Mark’s, gave his verbal commitment to Texas a year ago, and likewise is anxious to join the recent HP pipeline to the perennial NCAA powerhouse.

“I felt like the culture at the school is where I wanted to be, and the facilities are impeccable,” Fojtasek said. “There’s a lot of good players on the team, so my game should improve.”

Was Waving ‘Come And Take It’ Flag Wrong?