RICHARDSON — Highland Park’s season ended in bittersweet fashion on Saturday, with the Lady Scots falling just short of the Class 5A state tournament.

Although HP was swept by Lovejoy, 25-20, 25-14, 25-17, in the Region II final, the Lady Scots capped a successful season with a lengthy playoff run. Still, coming so close always stings.

“I’m really proud of my team,” said HP head coach Michael Dearman. “We had the opportunity to do something really special, but sometimes the other team plays better than you.”

Indeed, it’s difficult to dispute that the Leopards (46-5) were the superior squad on Saturday, using a combination of speed and power to control play at the net.

The defeat snapped a 24-match winning streak for the Lady Scots (38-12), who were denied their first state tournament appearance since 2008.

“We didn’t have our best game today. They outplayed us,” Dearman said. “They did a great job in transition and controlled the ball well. They put pressure on us.”

After a quick start by Lovejoy, the Lady Scots got six straight points off the serve of Kennedy Westendorff midway through the first set, but could never get on even terms.

HP started the second set with a 3-0 advantage before the Leopards battled back behind some stellar blocking led by Brynn Eggar, Ellie Jonke, and Grace Milliken. Meanwhile, versatile hitter Cecily Bramschreiber — a TCU commit — was a force from either the front or the back row.

The Lady Scots had a few highlights in the final set, including stuff blocks by Anna Claire Nichol and Lauren McMahon on consecutive Lovejoy swings, along with big kills by Nichol and Kate Nugent.

However, Milliken’s kill on match point sent the Leopards back to state, where they were the 5A runner-up a year ago.

Both teams advanced to the regional final with impressive semifinal showings on Friday, when HP swept Midlothian and Lovejoy toppled Red Oak. 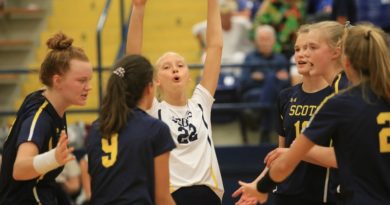