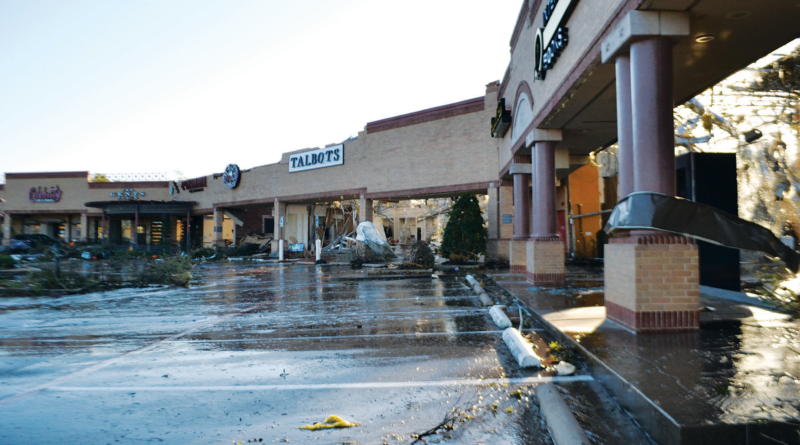 More than a week into November, restaurant owner Frank Nuccio still didn’t know in what condition the Oct. 20 tornado left his Marco’s Pizza in the Preston Oaks shopping center.

“State Farm insurance and I still are not authorized to enter the center until the structural engineer has finalized their report,” Nuccio said. “I fear I may not be able to salvage any of my equipment. The roof has been peeled off for nearly three weeks, and it’s rained a third of the time.”

The shopping center on the southeast side of Preston Road and Royal took a direct hit with the twister shearing roofs off stores and destroying windows and walls.

“The roof has been peeled off for nearly three weeks, and it’s rained a third of the time.” -Frank Nuccio

“My gut tells me they’re going to tear most of the shopping center down and rebuild, and if that’s the case, I may not be reopening for up to a year because I would like to stay in this center albeit in a more visible spot,” Nuccio said. “Perhaps some folks reading this are real estate agents that could lease me a temporary space in Preston Hollow that was once a small eatery.”

Ben Davis, owner of The Gents Place grooming and lifestyle clubs, has grown disappointed and frustrated with his landlord.

“I have gotten my attorney involved, as several other tenants have, and we are hoping they give us an answer soon,” he said.

Eric Davidson, a spokesperson with Regency Centers, the property management company for Preston Oaks, said access is coming, but the focus is on safety first.

“Some have been able to go onsite, but we’re also working closely with our structural engineers to see what is safe to access and what isn’t due to the damage from the storm,” he said.

In the meantime, all Preston Hollow team members of The Gents Place have relocated to the Uptown location across from Breadwinners on McKinney Avenue, and customers looking to support them can book appointments and buy memberships and gift cards online, Davis said.

Businesses on the north side of Royal Lane are faring better.

“Since the tornado two weeks ago, we have successfully helped 90% of our retail partners reopen,” said Clair Wei, spokesperson for EDEN Properties, which manages Preston Royal Village.

“The way it’s brought this neighborhood closer has been something truly inspiring and has reminded me I can truly touch people’s lives in a unique way,” Alexis said.

Holiday shoppers can help impacted businesses who reopened, but what about those trying to recover from more intense damage?

“In the near future, NHG will be encouraging patrons that have been wanting to support us to shop in our temporary operations when trees, greenery, and poinsettias arrive after mid-November,” said spokesperson Alexis Patterson. “We’ll also be offering gift cards, garden coach appointments, and a limited menu of offsite classes and workshops during the holiday season.”