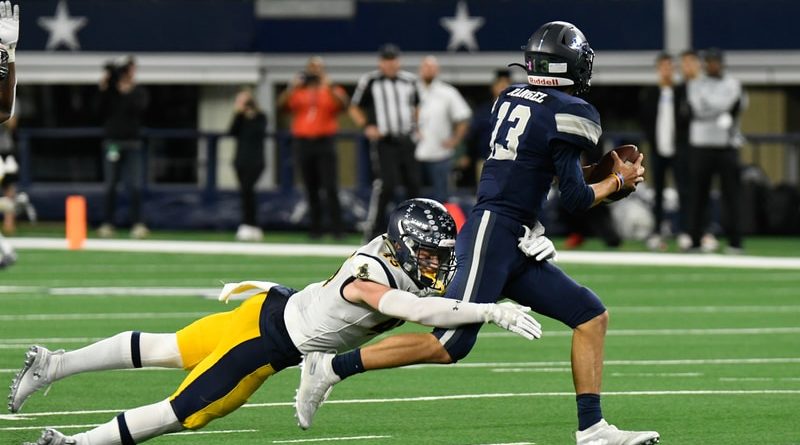 That reality hit Highland Park on Friday after a thrilling 33-27 overtime loss to unbeaten Frisco Lone Star in a Region II semifinal game at AT&T Stadium.

The Scots only lost to one team all season, and that was the Rangers, who beat them twice. The second defeat ended HP’s campaign without a state title for the first time since 2015.

“When you play your heart out, and you give it all you’ve got, it’s so hard to let go, and it’s hard to end the journey,” said HP head coach Randy Allen. “We got beat by a good football team. They made some plays at the end.”

Jaden Nixon scored the winning touchdown on an 18-yard run in overtime, after the Scots started with the ball but missed a field goal.

It was fitting that regulation play couldn’t decide a seesaw contest that saw four ties and multiple lead changes, with neither team gaining more than a seven-point advantage throughout.

Coincidentally, it was a made field goal that sent the game into overtime, as HP’s Wesley Winters connected on a 39-yard attempt in the final minute to knot the score at 27.

However, Lone Star responded with its best drive of the night, covering 88 yards in 10 plays, culminating in a 16-yard touchdown pass from Garret Rangel to Marvin Mims on a desperation fourth down.

Mims, an Oklahoma commit and one of the top receivers in the state, was bracketed with double coverage for much of the night but still managed nine catches for 86 yards and two touchdowns. He did most of his damage in the second half.

“We wanted to make someone else beat us,” Allen said of Mims. “They found some other receivers, but he’s such a playmaker. He makes plays even when you’re double-teaming him.”

Meanwhile, the Rangers showed their versatility in the passing game when HP bottled up Mims. Rangel, a sophomore, completed 35 of 49 throws for 417 yards with three touchdowns. Trace Bruckner tallied 14 receptions for 183 yards.

“Garret is a tremendous leader and competitor, and he’s unflappable. He got hit a bunch of times, but he kept getting up and leading our offense,” said Lone Star head coach Jeff Rayburn. “We knew [HP was] going to be better [than the first meeting], and we knew we had to be better to have a chance.”

The teams traded touchdowns on their opening drives. Lone Star started with an 11-yard strike from Rangel to Mims, and HP responded with an 18-yard scamper by Chandler Morris.

The Scots took their first lead at 17-10 after the game’s only turnover — an interception by Tanner Schrank on a tipped ball in HP territory in the opening minute of the second quarter.

Two snaps later, Morris hooked up with Drew Scott for a 68-yard score. Scott finished with a team-high 119 yards on four receptions.

The Rangers knotted the score again just before halftime on a 17-yard touchdown pass from Rangel to Tolu Sokoya.

HP started the second half with its best possession of the game, going 75 yards in 13 plays, capped by a highlight-reel 10-yard reception by Paxton Anderson in the end zone to make the score 24-17.

Winters made a field goal earlier in that drive, but the Rangers were flagged for roughing the kicker. So the Scots took the three points off the board in favor of five yards and an automatic first down, and wound up capitalizing.

Penalty flags were common throughout the game, which featured 284 penalty yards almost evenly split between the two teams. More than half of those came in the first quarter.

“We had a great plan and our kids played hard,” said Allen, whose team had won nine straight games at the home of the Dallas Cowboys. “They have a really great team and they made a play when they needed one.”

It was the final game in an HP uniform for several key contributors. Morris finished 19-of 31 passing for 239 yards and a pair of touchdowns, while also rushing for a game-high 83 yards and a score.

Defensive lineman Prince Dorbah, who has verbally committed to Texas, had a sack and multiple tackles for loss. Hunter Heath, who rushed for more than 1,000 yards this season, played through a minor injury and recorded 76 all-purpose yards.

“They left it better than they found it,” Allen said of the seniors. “They’ve conducted themselves in a way that brought pride back to our school and our community. They beat some really good football teams and had a great year.”

During the first clash on Sept. 13, HP committed four turnovers in a 30-19 defeat. The Scots had no miscues on Friday, but the Rangers still prevailed. As a result, HP won’t play any December football for the first time in four years.

Scots Surge Past Poteet in OT