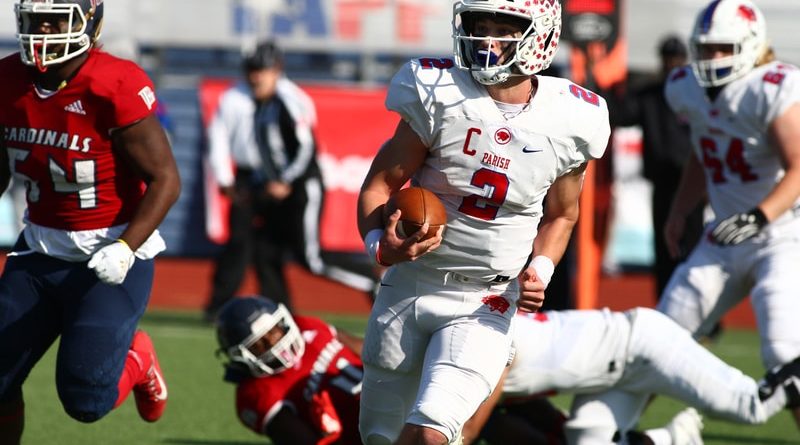 WACO — Parish Episcopal reached the top of the Texas private-school football ranks with a TAPPS Division I state championship on Friday.

However, the Panthers’ decisive 42-14 victory over Plano John Paul II in the title game capped an ascent to the summit that began when Parish joined largest TAPPS classification in 2017.

On Friday, Stone rushed for three touchdowns and threw for another, leading the Panthers past the Cardinals for the second time this season.

“He’s done it all year. He’s the No. 1 quarterback in the country for a reason,” said Parish head coach Daniel Novakov. “We let him run a little bit more today, which I think surprised them.”

Stone, one of the leading quarterback recruits in the country among juniors, proved his dual-threat ability with 146 rushing yards on 17 carries. He also passed for 151 yards in windy conditions as the Panthers rallied from an early deficit and pulled away in the second half.

Christian Benson racked up 187 all-purpose yards and scored twice. And the Parish defense, led by Josue Munoz with three sacks and a pair of forced fumbles, shut out JPII in the second half.

In 2017, Parish owned a history of success — including state championships in 2010 and 2014 — but little pedigree against the big boys. Two years later, the Panthers improved from five wins to 12, and swept every rival in perhaps the most difficult TAPPS district in the state.

“I don’t think a lot of people realize how hard of a job this was, not just for me, but for a lot of people,” Novakov said. “[The school administration committed] to building this program the right way when we moved up. Without that support, none of this would be possible.”

Parish outscored JPII by a combined margin of 89-21 in two meetings. Since their 47-7 loss at Parish on Nov. 1, however, the Cardinals had won four straight games to reach their first state championship game.

“This has been a magical year for us. We had some seniors who stuck it out and helped us build this and change the culture,” said JPII head coach George Teague. “[Parish] did a great job. They’re in our district again next year, so we’ll see them again.”

After the Cardinals (10-4) opened the scoring, Parish took advantage of the wind at its back with three straight touchdowns, starting with a 29-yard pass from Stone to Benson to tie the game at 7.

The Panthers lost a fumble near midfield on their next drive. But Parish’s Luke Bridges intercepted a pass on the ensuing snap and returned it to the JPII 32-yard line.

“You never know how the wind is going to affect the game, so we wanted to be able to run it when we needed to. Our offensive line did a great job of controlling the line of scrimmage,” Novakov said. “You always want to play from ahead, because then you can make them one-dimensional.”

The Cardinals cut the deficit in half on a 70-yard scoring strike from Grayson James to Shunte Nettles in the opening minute of the second quarter. However, JPII never scored again.

Stone took over from there, finding paydirt on runs of 17, 54, and 17 yards. He finished the season with more than 4,000 yards of total offense. And he’ll return next year to help the Panthers defend their crown. 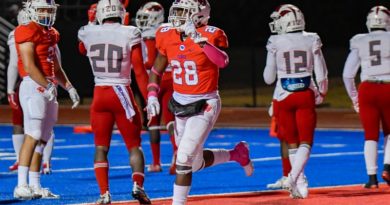