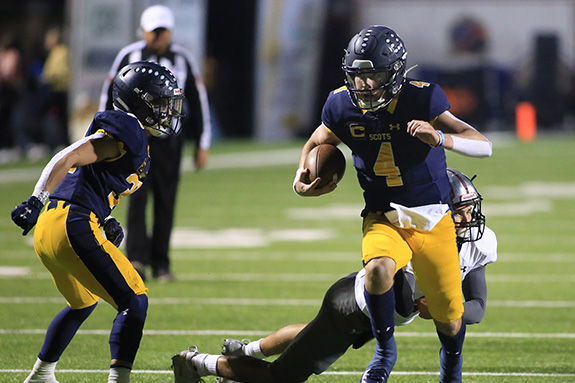 After winning a District 6-5A Div. I title during the regular season, Highland Park was rewarded with plenty of representation on the all-district team.

For the second straight year, quarterback Chandler Morris was chosen as MVP by the district’s coaches. Morris finished his senior season with 3,658 passing yards and 42 touchdowns. He also ran for 635 yards and 17 scores, and posted a 27-2 record as a two-year starter.

Prince Dorbah also was a unanimous selection as defensive MVP after a dominant season along the HP defensive line. Dorbah signed with Texas on Wednesday morning.

The Scots had 14 more first-team honorees, including eight on offense and six on defense. Wide receiver Ben Smith was a unanimous choice, while fellow receivers Case Savage and Drew Scott also made the first team.

On defense, HP had at least one first-teamer at each position. Those included lineman Houston Hummel, outside linebacker John Beecherl, inside linebacker Cal Hirschey, cornerback Ford Frazar, and safeties Walker Cobb and Maxwell Warren.