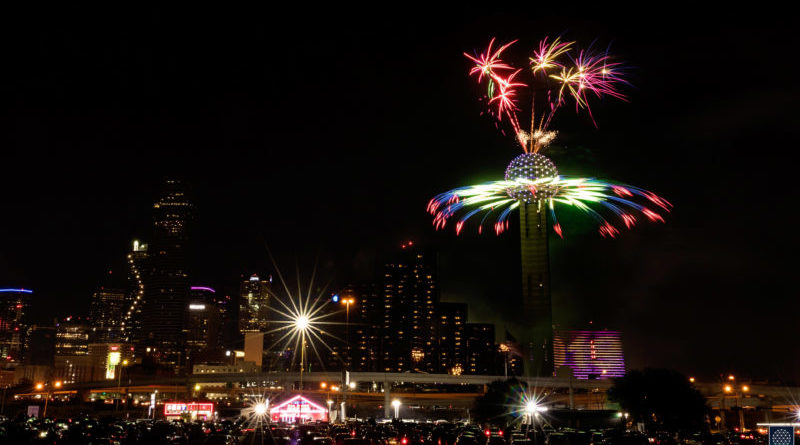 Everything’s bigger in Texas — including the New Year’s Eve fireworks.

Reunion Tower and Hunt Realty Investments will host a 360-degree fireworks show — one of the largest of its kind in the Central time zone — for the fourth year. This year’s show on Dec. 31 will feature a party on the plaza from 7 p.m. until 12:30 a.m. on the steps of Dallas City Hall sponsored by the Dallas Tourism Public Improvement District and produced by Visit Dallas with live entertainment, food, and drinks. This year’s event is championed by SMU.

“Reunion Tower is thrilled to be partnering with SMU on this year’s fireworks show,” Reunion Tower president Dusti Groskreutz said. “SMU is the true hometown university, and we are proud to partner with an academic institution dedicated to shaping world changers. Our show is as unique and innovative as SMU’s approach to preparing students for a variety of careers and graduate education.”

SMU vice president for development and external affairs Brad Cheves said he appreciates the support the university’s received from the larger Dallas community.

“This past year has been almost a historic one for SMU… we’re honored to have been embraced in increasing ways by our city… we have a vibrant partnership with DISD, Mayor (Eric) Johnson spoke at (the December) commencement,” Cheves said. “This was a great way to celebrate the partnership between our hometown, our region, and SMU.”

Groskreutz said it takes almost a full-year of planning to put together the 10-minute show, which features more than 5,000 pyrotechnics and special effects.

“We want to be . . . that countdown to New Year’s event for the Central Time Zone,” she said. “We built the show for everyone, it’s 360 degrees, anywhere you can see it, you’re experiencing the same spectacular fireworks — they’re shooting them over 300 feet above the tower, 160 feet outside the tower, they’re shooting them down… if you look closely, there’ll be some nods to the architecture around Dallas, so we’ve sort of built some of the architectural elements of Dallas into the fireworks themselves… there’s also a nod to the Lone Star State and Big Tex.”

This year’s show will also feature an estimated 5,400 effects, including waterfalls, fountains, and more.

Jackopierce Returns to SMU on Dec. 2 for Annual Christmas Show