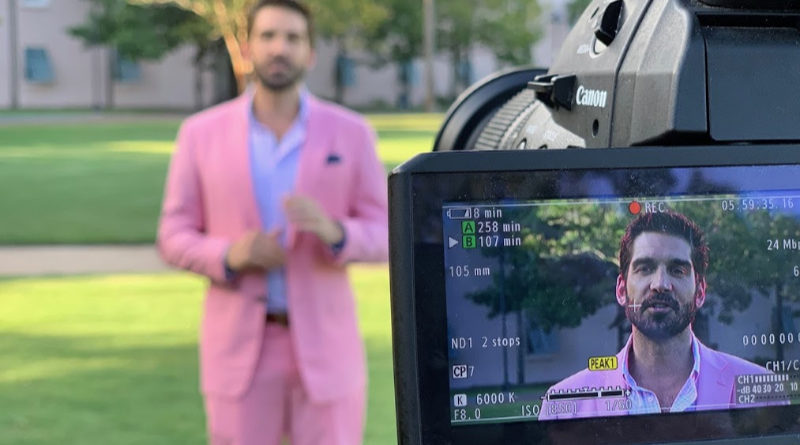 When you own a successful real estate brokerage, your name does end up all over town. But as much as Rogers Healy wants to help buyers and sellers find and sell their homes, he also wants to live in their TVs.

And he had already made some significant inroads with that endeavor by his appearances as an expert in his field on various national business news channels. But then a new opportunity opened up — one the Highland Park native knew was perfect: Selling Mega Mansions, a real estate reality TV show.

In its fifth season, the show features homes all over the country — luxury homes, to be exact. Healy was tapped to take over hosting duties for this season, which features homes in Las Vegas; Aspen, Colorado; Charlotte, North Carolina; and Charleston, South Carolina. Each episode features Healy helping a couple search for their dream home, with all the attendant angst and joy that go along with that.

“It was awesome – it was a blast,” Healy said. “It was the most fun thing I’ve ever done in my life.”

But how did Healy get the gig?

“The producers are Texas-based, and every year they just pick different cities to feature – just to be on the show, and it features beautiful listings that are not in the usual cliche – Miami, New York, LA,” he explained. “And we were on it as the featured Realtors about four years ago.”

“I just got to be friends with the production team, and just kind of casually about a year ago, we were having a conversation about what their future plans were, and I just said, ‘Hey, I’d love to be involved from a hosting perspective’ – and I got the gig.”

“It really is just this extreme version of house hunting, and I think that’s why they wanted to bring me on, so that I can bring some humor to a fairly intense environment with people that are spending an ungodly amount of money and don’t have to spend it at all.” – Rogers Healy

Healy said he thinks that his perspective and understanding of that mega-mansion market, and who buys and sells them, translates well to the show.

“It’s another animal altogether,” he said of the differences between the luxury market and the regular residential market. “And in Dallas, the Park Cities, Frisco, wherever, the inventory for $5 (million) or even $10 million-plus homes is fairly significant no matter how the economy is performing.”

“So, on the marketing side, these buyers are not buyers who have a sense of urgency, or even more importantly, have a desire to purchase anything,” he continued. “So we kind of just have to go find them by non-traditional approaches. It’s totally a different game altogether.”

And the differences between the market he usually works in and the ones he visited for the show enlightened him as well.

“Something that blew my mind, is that Aspen, where you’d think stuff over $10 million sells every single day, it’s really like five or six a year,” he said. “I heard that kind of stuff and was like, ‘wow.'”

“It just takes more money, more time, and more patience,” he said. “And once you have that kind of disposable income and liquidity, you’re not purchasing on the investment side, you’re purchasing on your personal and emotional side, which kind of goes against everything most people think with a real estate investment.”

Thank you to all the incredible people in #Aspen, for one of the most memorable weeks of my life! Throughout my career in real estate, I’ve made some memories that will always stand out…but being able to host an international TV show is still insane to me! We were able to tour some of the most gorgeous (and expensive) mansions over the course of the week, and having some of my buddies there with me made it that much sweeter. Next up—-Charlotte, NC. I can’t wait to announce the show to y’all soon! Want your luxury estate to be featured? Rogers@RogersHealy.com. BOOM! #healyrelocation #rogershealy #rhadfw

At the luxury price point, Healy said, buyers are just not under the gun to buy, unlike someone who perhaps is being transferred to a new city, or wants to move before the new school year.

“It’s a different audience looking, and the majority of them don’t have to do anything,” he said. “It’s just like maybe they’re just bored or maybe they’ve been waiting for 10 years for the perfect house.”

“But that’s the premise of the show I host,” Healy said. “It really is just this extreme version of house hunting, and I think that’s why they wanted to bring me on, so that I can bring some humor to a fairly intense environment with people that are spending an ungodly amount of money and don’t have to spend it at all.”

Now that season 5 is airing, Healy said he’s hopeful that he’ll be back.

“There was a lot of hard work, but we’re hopefully going to do season six coming up in the summer,” he said.

To see when to catch Healy on the small screen next, visit AWEtv.com.